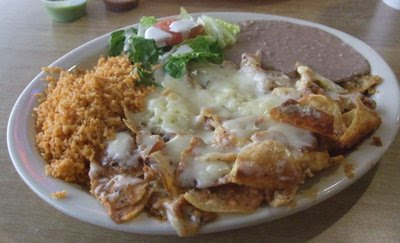 These aren't the best tastes, just some really good but very random ones I've enjoyed in this year of never-having-enough-time-to-try-everything eating. Looking over the posts of the past year is a good refresher course for the memory: 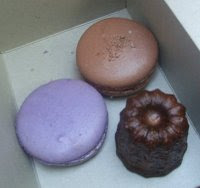 That was this year I had jury duty, with ceviche from Grand Central Market? There was really a time before Lamill? Remember the outpouring of Backdoor Bakery grief?
1) Santouka Ramen: The deliciousness of the ramen was made perhaps more profound by the horror of the natto that accompanied it.
2) Salted caramel ice cream from Carmela. Also, salted caramel macaroons at Europane, and salted peanut brittle from Morning Glory. OK, I guess I'm just a salted caramel slut. Also, the salt-tasting station from Saltistry. Salt = good.
3) Chilequiles at My Taco: they were probably so good because I waited until 3 pm to have breakfast.

They're also the right price, just down the street from my house, not crowded with annoying people, and there's a full menu of other Mexican breakfasts like chorizo and eggs.
4) Kimchee fried rice at Daisy Mint: Nearly everything I've had at Daisy Mint has been good, but this dish was our favorite so far, with the eggplant salad a close runner-up. The tangy cabbage adds just the right note of sourness against the rich fried rice. You can get any meat or tofu with it, but beef seems like the appropriately Korean choice.
5) This one's kind of embarrassing: I was about to list the Jamon Iberico de Bellota at Bar Pinxto, but instead I'm choosing the next post, for Kychon Chicken, because it will haunt your dreams. I don't need to eat much fried chicken -- the version at Gus's BBQ is actually quite good for white folk, chicken breast fried chicken -- but if I'm going to have it, from now on it's going to have to be from Kyochon. 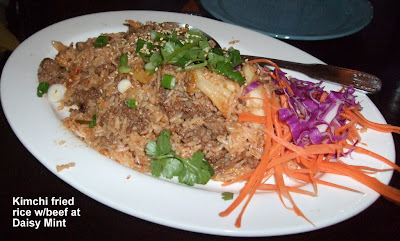 6) The amazing cherry cobbler I made from the cherries I picked in Leona Valley in June. The season only lasts a few weeks, but a few pounds of cherries made cobbler, ice cream and jam, and the cherries had so much more flavor than supermarket fruit.
7) Arctic char with beech mushrooms at Lamill, and the desserts. This was the dish that launched my butter-and-soy obsession, but I could never get the skin as crispy or the sauce as unctous as Lamill did. The salty/sweet desserts with exotic spices and flavors were also pitched just right to my tastebuds. 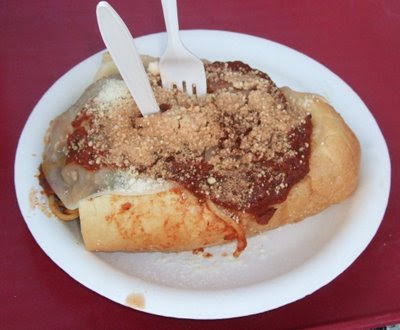 And the worst dish of 2008? The honor goes to the spagetti sandwich at the Stuffed Sandwich. Even as a vehicle to soak up beer, it doesn't work. And even though I love beer, the place is a little too strange to let you enjoy the beer.

i'm with you on the chilequiles! yum. since i had them there for a late lunch, i want them all the time..

yikes! people were actually sad to see the backdoor bakery go? i guess when you work at a place, you learn (sadly) of all it's foul practices...

OMG, we totally agree re that damn sandwich!

You live down the street from My Taco? So do we.....Avenue 63 in Garvanza!

love this list! thanks Pat... now i have new years resolution eating tour to look forward to... : ) also, interesting to know that i wasn't the only one that had jury duty this year and spent their lunch breaks enjoying the kiosk-style ethnic eats at the Central Market. what a hidden gem that is... if they only stayed open after dark...