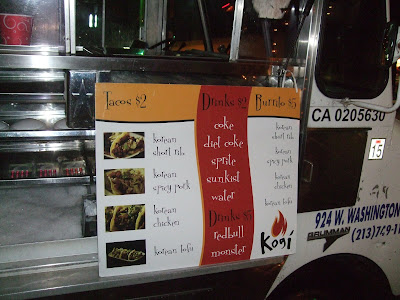 Hooray for Korean tacos, and hopefully more to come...

Oops, I'm sure Metromix meant to credit EatingLA for helping brainstorm The Ate List: A Year in the Life of L.A.'s dining scene. But because it's Christmas, we're going to give them a shout-out anyway. Their pick of trends for the last year included pig in all forms, craftbrews and gastropubs, street food and the post-cupcake craze. There's also 8 Openings Metromix looks forward to and 8 Smokin' Chefs...but no photos of most of the hot chefs, darn!

What about next year? Here's a few of my predictions:
1) Lower priced menus: Not just gimmicky "Depression menus," but restaurants all over town will need to rethink their menus and make sure there are plenty of options people can afford.
2) The Kogi Korean BBQ truck and the Green Truck were a good start, but I think in 2009 we'll see the birth of a vibrant street food culture in L.A., closer to the scene in Portland and Austin...unless, of course, government officials would prefer people not run successful small businesses.
3) The younger generation learns to cook...and make coffee: It's a conundrum: how will people save money by eating at home more often, when many have never learned basic cooking skills? And how will people economize by giving up their $5 lattes if they're not up to speed on home coffeemaking? Even more cooking classes and workshops will spring up to help meet the demand.
4) More community, less cost: Professional cooks will host more reasonably priced supper clubs than the $60-$100 ones we've seen in the past, while groups of friends will increasingly get together over cooking clubs and potlucks than at pricey restaurants.
5) Could this be the year we finally cut back on ahi tuna? Whether you believe Jeremy Piven's mercury poisoning tale or not (most people vote for not), it seems like diners and restaurateurs might finally be more interested in exploring more sustainable fish. Now if someone could just tell me where to get some great grilled sardines...

What do you think will happen in L.A. restaurants next year?
at 10:57 AM

I have no predictions, but I am totally crossing my fingers for lower-priced menus!

Hey! The Chicks with Knives Sustainable Supper Club is less than $50...I guess we are trend setters! Whoo-hooooooo.