It can be strangely difficult to find a good-quality, straight-up place for a relaxed Chinese dinner in the San Gabriel Valley. Dim sum is out; the dumpling houses are great, but the menu can be limited for several people dining together. Newport Seafood and its like is good for a group but gets pricey fast if the group likes lobster; the Sichuan places are likely to alienate at least one of your friends. Noodle Planet or Tasty Garden and the Hong Kong-style cafes tend to be heavy, greasy or bland or all three. Something like Mandarin Noodle Deli is about the right speed for a varied group of eaters.
This time our search led to Tasty Noodle House, one of Jonathan Gold's finds of last year, located in San Gabriel just a few doors down from Golden Deli. The small but comfortable minimall spot specializes in seafood-intensive dishes from Dailin province, but we were feeling less jellyfish and pork kidney-ish and more Chinese comfort food-ish, so the Dailin specialties like oyster soup and jellyfish head will have to wait for another time.
Tasty Noodle is one of a very small group of Chinese restaurants that aspires to higher-quality ingredients and lighter, less-greasy preparations, and it seemed like everything we ordered was a winner. Jalapeno beef, Tasty Noodle House
Scallion pancakes (seen behind jalapeno beef in the foreground) are a million times lighter and less greasy than the usual version, though the scallion flavor isn't very pronounced, the flakiness more than makes up for it. Jalapeno beef wasn't especially spicy or complex, but the straightforward dish had clean flavors and the meat lover in our threesome claimed it as his own. Braised green beans were again much less greasy than usual, but still had the slightly charred wok hey that makes this dish work so well. Hot 'n sour soup gets an unexpected jolt of flavor from dried shrimp and sea cucumber, putting it right up there with the top hot 'n sours in the city.
Northern dough-intensive dishes like dumplings and bao are stars on the menu, and our 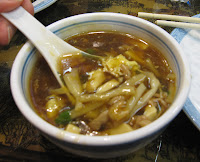 pork/shrimp/leek dumplings somehow became twice as wonderful after sitting for a few minutes while the medium-thick, rustic wrapper rested and the flavors coalesced. Since it was a zillion degrees outside, we chose cold sesame chicken noodles over dan dan noodles, and the simple dish was perfect for a summer night. This was one of the most enjoyable meals I've had in a long time, and we'll be returning soon to try pan-fried pork buns, seaweed strips in garlic and vinegar, ma po tofu, and perhaps the sea snail with jellyfish and fungus.
Tasty Noodle House
827 W. Las Tunas Dr.
San Gabriel
(626) 284-8898

Tasty Noodle House is superb! Delighted to see it get a write-up on Eating L.A. Another cold dish worth trying there is the sliced cucumber with shredded pork in vinegar sauce. My favorite thing to order at TNH is probably the eggplant with baby shrimp in a brown sauce, a delicate dish elevated to elegance by the minced garlic and perhaps a dash of sugar. And if anyone in your group needs to sweat a bit, TNH's Mapo Tofu happens to be as good as any of the Szechuan eateries I've been to in the western SGV. (Pan Seared Buns by the way, are nearly as ethereal as the ones that used to be served at a place in Arcadia called coincidentally enough, Noodle House - http://www.laweekly.com/2006-11-02/eat-drink/when-the-bao-breaks/) - Eric

The first paragraph is so accurate! Great review! Gonna check out this place soon.

Wow, that meal looks super awesome. Want to go to there like, tomorrow. How do you think Tasty Noodle House would work with little kids in the mix? Are the tables roomy and service fairly speedy?

Oh yum! This place looks very good! Exactly what I am craving!

jjejejjeejj have been there!! and i ordered eggplant with baby shrimp in a brown sauce , it was very nice.regards

That hot and sour soup sounds really good. I enjoyed your write-up.

Thank you so much for this rec. My husband and I chose it over the wait at Golden Deli last weekend and boy was it great: the green beans, the sesame noodles with chicken, the dumplings, the scallion pancake - all terrific. But what really made the meal was the block of utterly fresh cold tofu doused in a terrific garlickly oil and chopped scallions. It was delicious and enough to feed five people.