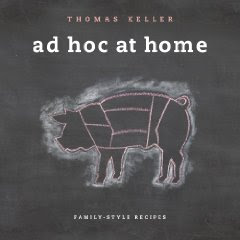 Thanks so much to the dozens of EatingLA readers who entered to win Thomas Keller's Ad Hoc cookbook. Who says nobody cooks anymore? The demand for this was huge! Congrats to Erica, who was the first to submit the correct answers:

2) The original owners of the French Laundry restaurant, Sally and Don Schmitt, relocated to the Philo Apple Farm in the tiny hamlet of Philo in Mendocino County. Philo is near Boonville, where residents improvised a quasi-language in the early 1900s called Boontling.
at 9:55 AM

Nice shout out to the Apple Farm; Sally has retired from teaching cooking classes, I've heard. Her daughter Karen is carrying on the tradition. Wish Sally had written a cookbook; she has some amazing old time recipes all on index cards.