We hear Umami Burger Los Feliz plans to open Friday in the old Cobras & Matadors space on Hollywood Blvd....finally, good burgers on the near-Eastside! To my mind, Umami is the best of all the burgers, but I hope the service will be able to keep up with the demand. Here's more on Umami and the attached bar Salaryman, which replaces Sgt. Recruiter from EaterLA. Also, the new Eater national edition will give $25 to anyone willing to shut down his or her foodblog. Um, maybe for $25,000?
***
The Verdugo Bar's Ryan Sweeney will open the Surly Goat on Santa Monica Blvd. near Baby Blues BBQ. Sweeney is partnering with Adolfo Suaya on the Goat, which will have a few snacks but not a full menu. In the meantime, don't miss the vegan Over the Top Oktoberfest at the Verdugo this Sunday and the big blow-out Oktoberfest on Saturday, Oct. 17.
***
More coffee on the real Eastside: the Coffee Table's owner will open Cafe con Leche in Boyle Heights at Self-Help Graphics early next year, and Antigua Coffee House has not only re-opened in Cypress Park but plans another location in El Sereno where is was originally located.
*** 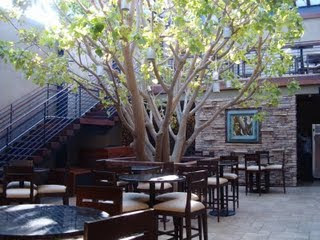 And Rockwell VT, behind Vermont restaurant is having its official grand opening this weekend after a soft opening period. Brunch will be served on both Saturdays and Sundays.
(Rockwell photo from Food, she thought)
at 10:10 PM

Eater is crazy.
Yhey have gone down Hill and after that i'm done with the site.
Rockwell is a nice addition gonna try some food tonight since i'm around the corner.
Umami Sat. since it's across the street woo hooo

How about if we all kick in $25 to see if we can make Eater go away?

Hi Pat--I love the blog..just wanted to tell you that Blair's is now only serving dinner...I will miss their chopped salad for lunch.

I am with you Colleen. I, like most bloggers, spend a boatload of my own time (for which I am paid ridiculously more than $25 per hour professionally, much to my surprise), and and money writing, monitoring and caring for our blogs. For $25 about all Eater LA can do is bite me.