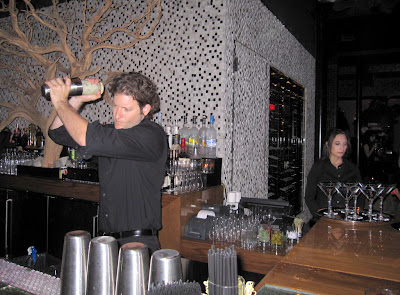 Cute bartenders and cocktails with silly names -- East is everything Hollywood could want.

Nightlife impresario David Judaken's East Restaurant and Lounge on Hollywood Blvd. probably isn't the kind of place you're going to hang out much if Best Fish Taco in Ensenada is your idea of a big night out. But if you've got friends in from out of town who want to check out Hollywood nightlife, or a hottie you're looking to impress, this 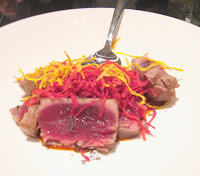 could be the place. East, right next to Lucky Devil's, is Judaken's first full-on restaurant, and it's designed by reliably over-the-top decorator Dodd Mitchell. Mitchell incorporates everything from fire, paper, leather and tree branches to mirrored tiles and a few safari style elements -- the overall effect is "Rich people on safari in Asia get lost in a luxurious abandoned cathedral." The dining room at the rear is particularly stunning, with high, arched ceilings, walls lined with rough white stone and secluded booths in nooks. 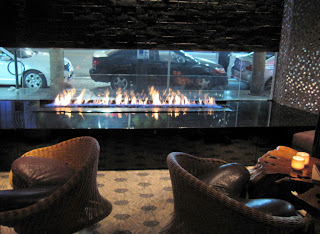 We were invited to a preview of the restaurant, which opens Tuesday, and the food was just right for Hollywood crawlers who don't want to be weighed down before a night of clubbing -- several preparations of sashimi and crudo with various sauces, seared ahi with yams (above right), Jidori chicken, a nicely cooked skirt steak, and my favorite, an appetizer take on lobster rolls with lobster meat perching on heavily buttered brioche slices.
The cocktail menu is saddled with some unfortunate names meant to provoke conversation --

and titters -- i.e., "I'll have a Facial please, and my girlfriend wants a One Night Stand." Some of the cocktails are much better than their names, though, and several of us enjoyed the Reckoner, made with Ri whiskey, red bell pepper, purple basil and lemon.
With its striking design, East is worth a look and a cocktail for anyone interested in restaurant design or Hollywood nightlife.
at 10:13 AM