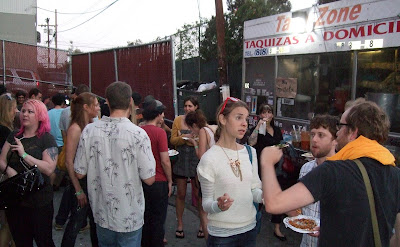 Thank goodness the Taco Zone folks showed up when the vegan food ran out!

I shudder to think what this morning would have felt like if I had used all the tasting tickets from yesterday's Craft Beer L.A. fest. My notes are a bit hazy but I think I tried around 12 or the 28 beers available to taste. I know the people who didn't buy a ticket ahead of time had a long wait to get in, but those who bought online got in quickly at 2 when there was still a good selection of food. We tried Golden State's refreshing cucumber salad, Hefweizen vegan cupcakes, Hefweizen and Ommegang ice cream and sorbet from Scoops, and some wonderful cheeses (especially the Beemster XO gouda!) from the Hot Knives guys supplied by Nicole's Gourmet Imports. 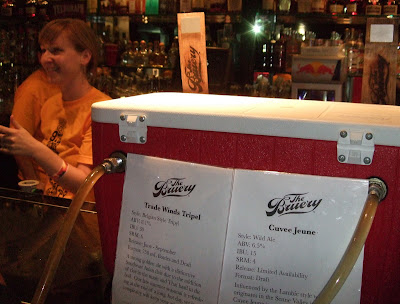 It was great talking to the brewers and beer connoisseurs including Patrick Rue from the Bruery, Mark Jilg from Craftsman, Christina Perozzi, the beer chick and the Verdugo's Ryan Sweeney. Perozzi moderated the Craft Beer Roundtable, and it was nostalgic to hear Sierra Nevada's Steve Grossman talk about the influence of New Albion, which was the first beer I ever wrote about, and have Perozzi exhort the crowd to "give it up for Fritz Maytag!" who helped reintroduce craft brewing to America with Anchor Steam. 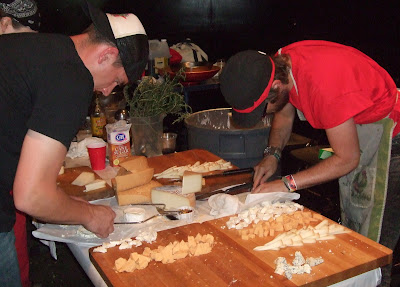 My favorite beers? Of course, I didn't get them all, but I'd have to say the most interesting were the Bruery's Cuvee Jeune Young Lambic, Stone's Sublimely Self-Righteous Black IPA and Uncommon Brewers' Siamese Twin Belgian style Dubbel. Also notable were Taps' strong but well-balanced Barleywine and Craftsman's tasty Scotch Isle Ale. 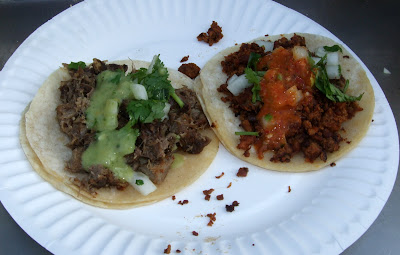 All those cervezas needed to be topped off with my first lengua taco ever. Ay carumba!

It was so encouraging to see how many people turned out to try an amazing range of California-brewed beers, raising a ton of money for 826LA in the process. And I never get tired of beefy guys asking me whether I'm a hophead or not. (Yes, I am). But next year, please have it in a nice green park, so we can move out of the darkness and sweltering heat of the Echo. Who else went?
Here's an excellent report from the Uncouth Gourmands blog.
Were you able to get in? What were your favorite beers? 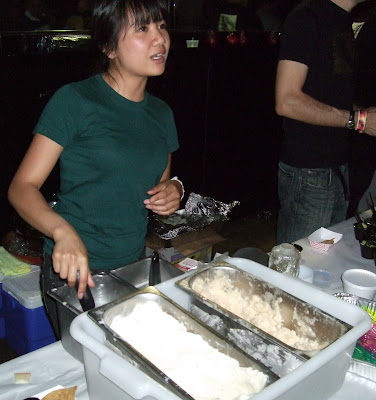 Loving the beer-flavored gelato and sorbet at Scoops
at 12:37 PM

Good seeing you at the beer fest. Once I got inside it was a lot of fun. It helps that people in the beer industry are so down to earth and approachable. Totally agree with you about the Cuvee Jeune, Craftsman Scotch Isle and Ommegang pear sorbet. Good to see Jason from The Golden State. He was the only vendor who actually served something healthy. His Persian cucumber salad was refreshing in the sweltering heat. Next year, maybe have the beer fest outside. That panel discussion was pretty good, but just like at the Beer Wars premiere, nobody actually defined "craft beer." Does it have to do with quality or production?

Only 1 person could make a comment because the event team left about 500 people stranded out side for hours, before someone said leave.

It was WAY TOO HOT and crowded, making waits for beer at the two bar areas way too long. We stayed for nearly 5 hours but couldn't use up our tickets. Waiting in line repeatedly in a steam room for 3 oz pours is not my idea of a good time. GREAT BEER but bad venue and bad organization.

As one of the organizers thanks for coming and blogging Pat!
To those that had problems with lines and heat; we appreciate those that stuck it out in the lines and the hot. This was a great learning experience for us and we will take all of your comments to heart when planning for next year's event.

This was organized TERRIBLY, making it an unfortunate event for ticket and non-ticket holders alike. Sad, because it could have been really cool.

The thoughts in the post weren't shared by anyone on the street, or at least not by anyone I was within an earshot of.

If there IS a next time, I predict a much smaller turnout. You can count ME out, that's for sure.

great review. I was one of the pathetic masses who didn't get in until well after most of the food was gone!

Yep, I agree with most of the comments.

Negatives: Too crowded, too hot, too dark, no actual access to the brewers, incredibly long lines, no food (I had 2 mini cupcakes the entire evening).

Positives: the bathroom was air conditioned, which led to people just kicking it in the bathroom as a nice escape (that's how stuffy it was in the venue itself.)

It was also a great crowd. I think once people got in and realized what they were in for, you had 2 options: 1) leave instantly (which I saw several people do) or 2) acknowledge you're going to be hugely uncomfortable for the next 5 hours and make the best of it! That left people in sort of a "we're all in the together" mode, which turned out to be pretty fun. Misery loves company!

And ultimately, a pretty good beer selection which was great (when you could get one...) I definitely won't be back unless they can prove the venue is leaps and bounds better next year.

Those who didn’t like it, that’s really too bad.. I had a great time from 2-7pm. Ate more then enough food and drink. I never waited more then 10 minutes for a beer. I think those that are here whining on this blog obviously have never been to the ECHO. It’s a concert venue/ bar, so of course it will be hot. If you didn’t have a ticket then it is your own damn fault for not planning ahead. Just like any event in LA (concert, movie ect) if you are in a stand-by line you know there is a risk of not getting in. Bottom line stop whining.. it was an awesome time.