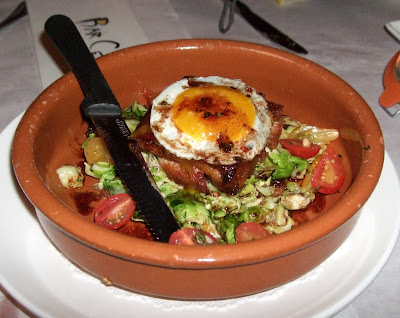 Crispy pork belly with a fried egg and brussels sprouts

Finding good grub in the largely soulless corporate corridor of Pasadena's Old Town can be challenging, but it can be done if you know where to look. Last week FoodGPS, Glutser and EatingLA were invited to try out the menu that Josef Centeno consulted on for Bar Celona, and found some very lively tapas going on. Centeno drops in once a week or so, our server told us, so although he's not cooking there every night, his influence is clearly felt. Ordering a cross section of the tapas menu, we found several good choices. 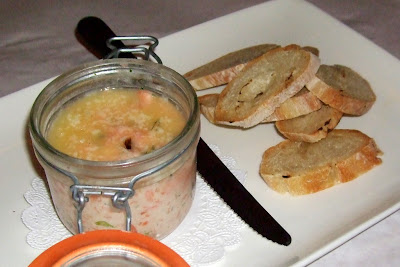 Salmon conserva (above) blew away Palate's tuna conserve, likely because it tasted like a one-to-one ratio of salmon to butter. Blistered padron peppers with Spanish sea salt would be the perfect accompaniment to a frosty beer, while sweet potato empanadas came with a zippy Romesco sauce. Octopus salad mixed it up with buttery white beans, and while the crispy pork belly might not have reached the heights of Animal's, the fatty part played nicely off roasted brussel sprout leaves. The larger entrees weren't quite as exciting -- seafood paella was well-spiced, but too heavy on the orange flavor, while sea trout with chard also hit the orange juice note way too hard, and was slightly overcooked.
As with Opus and Lot 1, it's not clear that Bar Celona is the best possible showcase for Centeno's food, and hopefully he'll soon be able to open his own restaurant Downtown. It's a huge space with at least four separate areas, when a more intimate space might be preferable. But for now, Bar Celona is really cooking with a strong tapas menu, and certainly worth a stop in between expeditions to H & M and Neo 39 shoes.
Bar Celona
46 E. Colorado Blvd.
Pasadena

Look delicious! Thanks for sharing