Trip report: a brief and nostalgic tour of Santa Barbara 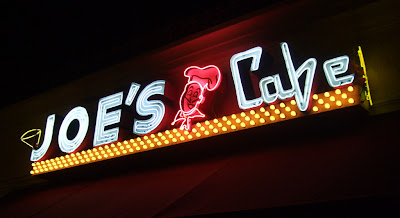 The French lady I spoke to at the pool in Santa Barbara seemed a bit shocked that our mini-vacances consisted of just one night at our pleasant motel complete with ducks and lagoon. "Mon dieu! Ces Americains travaillent beaucoup," Nicole-Sophie probably said to Christian. Oui, but what can you do? My daughter, her friend and I took a short jaunt mostly to check out UCSB, which has a stunning beachfront location and plenty of fast-food outlets right on campus. 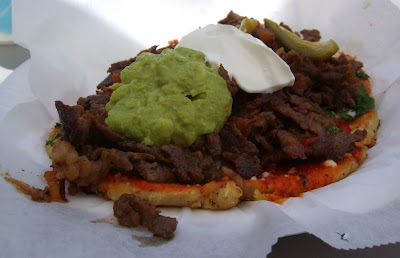 Since I've stopped at La Super-Rica pretty much every other time I've been to Santa Barbara for the past 18 years or so, we decided to branch out, so our first stop was El Bajio down the street. The prices seemed rather high -- $2.99 each for tacos, $7.29 for a sope. But La Super-Rica's prices are probably comparable, and it turned out to be the best and certainly most filling sope I've ever had, with a fresh, soft disk of cornmeal topped with about half a pound of juicy, savory carne asada that played off the cool scoops of guacamole and sour cream extremely nicely. You really don't have to ever eat again after one of these -- but then I seem to say that everytime I eat something like a pupusa or an arepa. Many, many hours later we were finally ready for dinner. We walked by some charming-looking spots like Square One and the 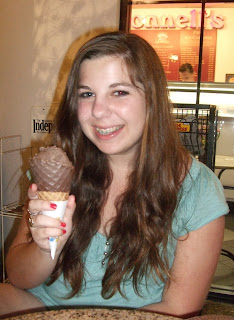 Palace Cafe, but with two teen girls, one extremely picky (that would be mine), we opted for an old favorite, Joe's Cafe on lower State St. This old-school restaurant was my late dad's favorite spot in town, and the menu of pasta, seafood and burgers is perfect for kids. Plus, they had the local Firestone Double Barrel Ale on tap, which went down well with a basic mahi mahi sandwich. It was more nostalgia for dessert with a trip to McConnell's Ice Cream. I'm sure it's heretical to say so, but I like their ice cream better than Fosselman's, particularly the banana and the Turkish coffee -- it's denser, with a deeper flavor. So, a short trip, but with one new favorite and two old ones, still a good intro to the city for my daughter who would like to eventually go to school there.
at 9:18 PM

Sounds like a good weekend trip. Most people seem to think that La Super-Rica is the only restaurant on Milpas, but El Bajio is also well worth a stop. They also have seafood and LSR doesn't. McConnell's is a solid old-time ice cream shop. Fosselman's is a fitting comparison. Hopefully you'll get plenty of other chances to visit Santa Barbara. Sounds like you will.

nice post, thanks. I am hoping that my daughter will someday consider UCSB as well, such a great campus. As an LA area foodie I can only encourage more posts relating to campus-friendly eats. This type of info is waaay more important than curriculum and tuition.