Street: a first look finds some dishes lost in translation 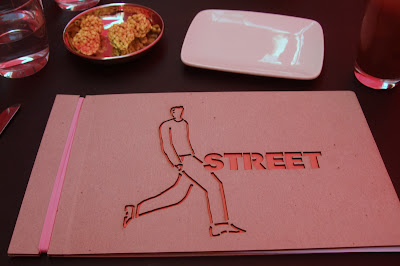 Kudos to the clever menu designer

It may take more than one visit to fully crystalize my thoughts on Street, which was still in its first week of service when I had lunch with a friend on Friday. Our first impression was of overall orangeness. The black and orange patio walls, covered by large orange umbrellas, make eating on the patio a tangerine dream, so thank goodness for Auto-color adjust. The menu is divided into dumplings, noodles, salads and main dishes, and it can be bit challenging picturing how the foods of say, Egypt and Thailand will work together in the meal. We ended up with two Asian-inspired dishes and one Middle Eastern one. 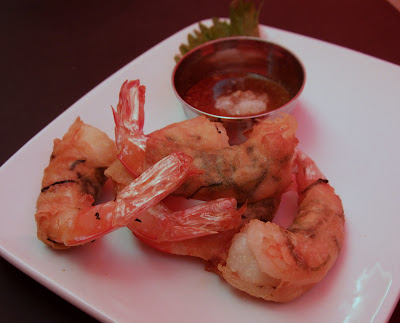 A dish of puffed millet with Indian spices was brought to the table; "like an Indian rice krispie treat," the waiter said, although the puffed millet was soft and chewy rather than crunchy as I had been anticipating. We started with shrimp and shiso leaf wrapped in rice paper with a pungent wasabi sauce; nice, but not really special, especially at $2 or more per shrimp. I'm not familiar enough with Korean food to know if a beast like the Korean rice salad we ordered exists in Korea, but it's a bit curious: brown rice, edamame sprouts, thin noodles, black cod, tofu and a fried egg all get along happily enough, but a pool of rich, sweet sesame dressing at the bottom makes it hard to go all the way. It's possible that a few too many of the dishes are topped with fried egg, making it hard not to end up with several fried eggs over the course of a meal. 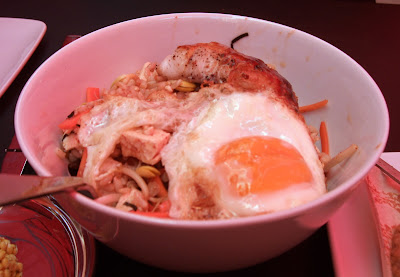 Theoretically this is the type of thing I usually feel like at lunchtime: fish, brown rice, vegetables, flavorful sauce, etc., yet it didn't all work quite well enough to make me want to order it again.
Lamb kofta kebabs with Za'atar (below), however, are perfectly spiced, and somehow even more flavorful than the quite good homemade merguez I made last week. 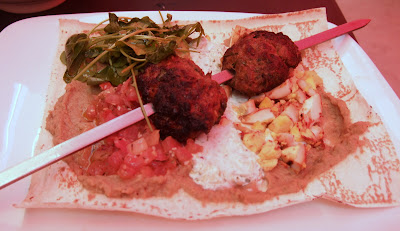 Served with a lavash bread spread with smoky eggplant, lebni yogurt and hardboiled eggs with harissa, the Middle Eastern flavors blend nicely and we only wish there were more than two meatballs in a $16 serving. 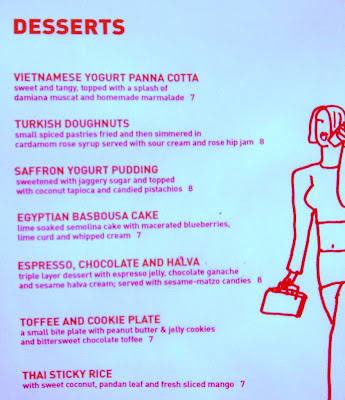 All the exotic flavors I like in my desserts are represented on the dessert menu: rose syrup, pandan leaf and such. We tried Vietnamese espresso jello layered with chocolate ganache and topped with halva; the ganache was rich and smooth, but the jello too stiff and the Intelligentsia coffee it was made with barely made itself known.
Our server was extremely knowledgeable
and helpful and Susan Feniger made the rounds to a few tables of longtime customers.-- everyone looked familiar, with at least two Bon Appetit staffers in the house.
Verdict: I love Feniger's passion for the exciting tastes of world street food, but I'm afraid the excitement is too likely to get lost in the translation to 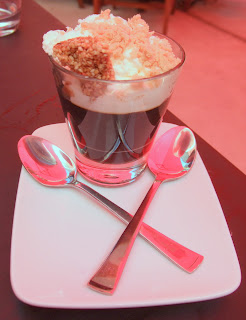 upscale restaurant food and higher-quality ingredients and the pricing those ingredients require. This is just a first look, but I'm not sure it's a good sign that after this lunch I found myself craving Mitsuwa market's deeply-flavored $2 coffee jello and excited to check out something called Kalbi & Kimchi I spotted in a minimall on Santa Monica Blvd. on the way home. Maybe that's the problem with Street: it's on the street, and not in a minimall.

i heard Galbi N' Kimchi (GNK for short) is pretty whatevers. i live right up the street from it, but knowing that Koreatown is only 5 minutes away, i'd much rather venture there for some legit Korean food. BUT i haven't tried GNK yet so if you do, let us know how it is.

thanks for the lowdown on Street! i still want to go there even though it's $16 for pho. hahaha

At those prices I can't help but think a more appropriate name would have been something along the line of "Gentrify". I too love Feniger's energy, but I think I'll stick with actual street food.

tried it Saturday night it wasn't very memorable. The Masman Chicken Curry had zero flavor and was served over soupy white rice which made a very unappetizing concoction. The noodle dish had me and wife chugging water all night long it was over salted from the soy sauce bath the noodles were in. Concept is a good one but the prices need to come down, execution cleaned and a lot of menu items need to be rethought. Deep down I have a bad feeling about Feniger's ability to get it right.

DigLounge wrote up Galbi N Kimchi. It might be whatevers, but kudos to them for starting a new fast-food Korean place that's edible.

i'm glad i'm not the only one who thought that the street food didn't translate to the higher class ingredients. we had a fairly disappointing meal there the night before you went. the pho was pretty flavorless and that really hurts when you're paying $16 for a bowl. and the beer prices - $8 for the cheapest 12 oz bottle?! i really wanted to love this place, since i can walk from my house, but the food and the less than casual attitude will probably prevent me from walking the five blocks again.

I ate their on Saturday night. The food ranged from good to forgettable. The left side of the menu (small plates) is MUCH better than the right side. In a city like LA, with amazing and authentic Korean and Thai restaurants, there is little reason to eat korean BBQ short ribs or mediocre Bibimbop here. My biggest complaint is that we were not seated until 9:30pm when we had a 9pm reservation. To make matters worse, they did not offer to buy us a round of drinks and only took a few appetizers off the menu when we asked them to "do something" at the end of the meal. On a $250 bill (before tip) they took of $17 worth of apps. Many of the cocktails cost above $10, so this really was not much. (BTW, the $16 cocktail is SO over in LA; just ask Bar 1912).

Overall, they need to shore up the way they run the restaurant. Relying on Ms. Feniger's hard earned reputation alone does not make a great restaurant. Unless they shore up the front of the house and focus the food on being unique, STREET will fail...and there will go Ms. Feniger's rep. It will be a long time before I spend my $$$ here again.

We had a great dinner and are going back next week. You must have the toast with the coconut jam. You then dunk the bread in a fried egg...sounds very odd but it's actually quite delicious. The panni porri starter was lovely too. And the tamarind iced tea. Our waiter was friendly and helpful and the overall atmosphere was bright and sunny. Valet parking is expensive but there's parking on Highland after 7PM.