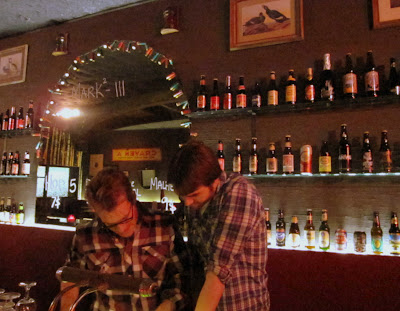 First-time visitors to the mini-mall that houses Rambutan might not realize everything that's going on there, since several spots there don't need a sign to draw visitors. Pho Cafe has been packing them in since it opened in 2005, and now Beer Bar at Rambutan is also flying on the downlow. Designed by Bar Covell's Dustin Lancaster, the bar is going for a Northwest woodsy feel with the inevitable antlers, plaid-clad bartenders, a canoe hanging from the ceiling and shotgun shell Christmas lights. The beer list was selected by Bar Covell's Matthew Kaner, and it's well-organized with beers listed in categories of California, North America, Europe, Germany and Belgium. Each beer also has the percentage of alcohol listed -- a good clue that it takes beer seriously -- and the bottles are conveniently arranged on the wall by price level. Several good choices are available at $5, which is quite reasonable these days.
There are just four taps, but NapaSmith imperial porter was perfect for the wintry night, while Port Brewing Hop 15 Double IPA was made for true hopheads. Also on tap are Malheur Belgian Quad and Bud, for those who want the largest-sized glass for the lowest price and least amount of flavor. Coming soon are snacks made by the Rambutan kitchen, including fried chicken, Thai fried chicken and mashed potatoes, but beer drinkers can also order from the full Rambutan menu in case you're craving some drunken noodles with your ale. A few wines are also available. 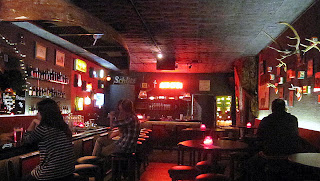 Yay: Reasonable prices, excellent selection of bottles, friendly, low-key.
Nay: Don't expect to snag a parking place in the mini-mall lot, though street parking is available further up Sunset. More taps would have been nice, and maybe a happy hour special.
Beer Bar at Rambutan
2835 W Sunset Blvd
(213) 273-8424
at 8:51 AM