Quaffing a rose-flavored soda pop at Sahag's Basturma on the Bike Bender.

Bike bender #2 went off well on a somewhat steamy East Hollywood afternoon Sunday, as 26 bike riders (and two lasses on a seagreen Vespa!) convened the caravan for EatingLA and FoodGPS's second Bike Bender. The last edition in Highland Park concentrated on Mexican food and beer; this time it was Armenian and Thai tastes and as always, beer. At stop #1, Sasoun Bakery, we tasted lahmajune, spicy cheese bourek hot out of the oven, tangy spinach bourek and date-nut cookies. 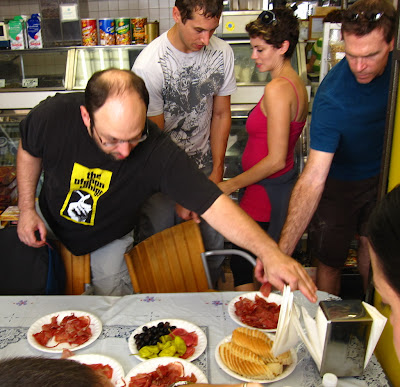 The afternoon was already heating up at stop #2 as we crowded into tiny Sahag's Basturma, where for 25 years they've been turning out spicy soujouk sausages, subtly-spiced, juicy finger-sized maaneg sausages and fenugreek-laden dried basturma (above), which gave us the Yiddish word pastrami. Soft bread, pungent olives and pepperoncini complemented the meats, which some paired with rose and tarragon sodas. 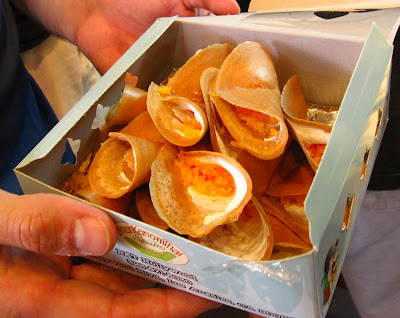 At stop#3, Bhan Kanom Thai, warm coconut khanom krok pancakes were just coming out of the molds, while the crepes for "Thai tacos" (above) were sizzling on the hot griddle before being topped with a marshmallow-ish cream and bits of salty egg or sweet coconut. Taro coconut cakes were not as universally loved, but I liked their lavender color and nutty flavor. While it didn't take long to cover the ground for the first three stops, we were all happy to arrive at the last one, the cool, dimly-lit Blue Palms Brewhouse, where each biker got to try two beers. My favorite was Ballast Point's Sculpin IPA, but there were plenty of others to enjoy.
Stay tuned for another delicious, sudsy Bike Bender in January -- possibly a Chinese New Year's edition!

Looks like I missed a great time. Looking forward to January.