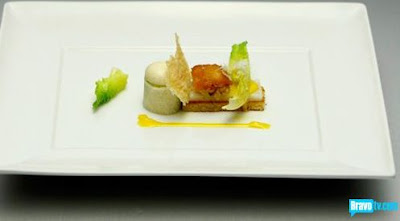 Top Chef #6 combined an Angel/Devil theme for the quickfire challenge with special guests Penn & Teller as well as judge Toby Young, the snarky British food critic.
In honor of the departed Mattin, they all don red kerchiefs. A few chefs made mean comments about Robin, saying she should have been the one to go instead of Mattin. Moments later, they must be regretting their meaness, as she describes her battle with lymphoma.
Highlights: I would have picked Michael V.'s salmon with ice cream as the worst idea, but the novelty-craving judges like it and it makes the finals.
It seems like everyone else does scallops.
The winner: Robin makes the kind of healthy dish she has been eating since she was diagnosed with cancer and became obsessed with raw food -- a "raw salad" of apples and fennel (salad is often raw, no?) and cardamom ginger crisp. Robin wins, playing the cancer card -- perhaps it's a pity vote, but at least she made something besides scallops. Eli cynically agrees, "That's a good way to win, telling them you have cancer!"
Now Penn and Teller come on and do a magic trick with a lime.
The elimination round: The chefs must deconstruct classic dishes like paella, fish 'n chips, shepherd's pie, etc.:
Highlights: At first, everyone flails around. Mike doesn't know what eggs florentine is, and apparently Googling isn't allowed. Several others look glum, since deconstructed isn't part of their culinary repertoire. The brothers V, on the other hand are practically smirking -- they should probably do this challenge with one hand tied behind their back. Michael immediately sets to baking brioche from scratch, basically just to make everyone else look bad. Eli, for some reason, is carting around his own dented pressure cooker as some kind of eccentric chefly security blanket, while Robin's chatter is making Laurene increasingly tense.
Highlights: Whoa! Michael's Caesar salad dressing is encapsulated in a sphere, vaulting him instantly into the top 4. Of course, he kind of snagged that from Jose Andres' liquid olive, but it's still an impressive-looking deconstructed Caesar salad.
Random: Toby Young looks a little scared of Penn. Teller, who never speaks, looks pained while tasting the fish 'n chips.
The loser: Ron seems increasingly over his head with his soggy yet dry paella which isn't really deconstructed -- "A sad bowl of food," says one of the judges. He's dismissed, but seems grateful to have made it from Haiti all the way to "Top Chef."
Young also says Robin's flan is "repulsive," and suggests Penn and Teller demonstrate how to magically make food disappear. Fortunately she has immunity. American critics don't make enough use of the word "repulsive," I feel.
The winner: Kevin's deconstructed chicken mole with chicken croquettes, Mexican coffee fig jam and pumpkin romesco looks quite good. The judges agree, although it's so spicy Teller is pantomiming smoke coming out of his ears. The brothers both turned in solid performances tonight, but it was a chance for some of the quieter chefs to shine with slightly simpler dishes.
Tonight's morale: Kevin says: "Cook what you believe in." Otherwise, you might try bringing up your close brush with death just before judging.
Best line ever: To deconstruct sweet and sour pork, Eli made pork tempura balls, which tasted good but looked...odd. Padm said, "I've actually had bull's testicles." Guest judge Penn Jillette said, "I'll bet!"
at 9:41 PM

I thought Judge Toby's comments about proper pronunciation, "We don't say 'Meheeko' we say 'MEXICO'" were totally annoying and I'm glad Michelle blasted him into place. I never understood why some bloggers rant about Giada pronouncing all of the Italian words (fettucheeni) properly on her show- if you know how to speak a foreign language, you SHOULD pronounce things properly instead of making an extra effort to Americanize it.

Anyway, enjoyed the episode and was glad to see RedBeard take the win; the V brothers are a force but could use a drink once in awhile........they take themselves so seriously. Jen is still a favorite and I'm glad her human side is showing more and more. I think we'll see one of the V brothers (probably Bryan), Jen, Redbeard and a wildcard in the finale.

I loved the look on Tom's face when Pen said that to Padma.

I'm kind of in love with Kevin.

The quickfire challange proved one thing - this group doesn't remember Fabio's lesson "This is Top Chef, not Top Scallop!"

And yup, I too ADORED the "I'll bet!" comment and Tom's reaction.

Love Kevin. The bros are intense but good. I'm liking Jen more and more. And Ashley is showing some surprises, good for her.