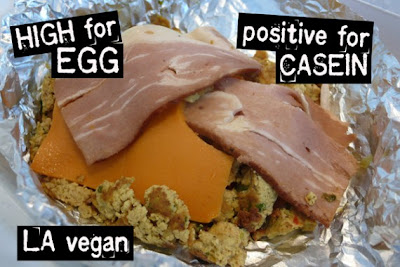 Sorry, but egg or no egg, I would never order this "cowgirl pancake" in a million years, it looks terrible.

I have to applaud QuarryGirl for her Operation Pancake report, where she takes on an intensive, scientific project: testing the food from many popular L.A. vegan restaurants for the presence of milk, egg, and shellfish. More bloggers should be so thorough! It's a long post but I'll summarize: Many of those ubitquitous Thai vegan places use stuff with a touch of egg in it, and basically it's hard to guarantee 100% at any restaurant that no cow has ever breathed on your food (casein is an often-hidden ingredient derived from milk). It's the same as I tell people looking for "healthy" food in restaurants: Face it, food in restaurants is probably not that healthy. Only by preparing it yourself will you really know what's in it. Frankly, I'm surprised that so many seemingly similar vegan restaurants can even survive in L.A. What do you think?
at 8:49 AM

even if that cowgirl pancake WAS vegan, i wouldn't eat it either. it looks like puke!

it's the tacos at pure luck that i'm actually really sad about...

How about the jackfruit tacos at Pure Luck? Those seem pretty popular.

i think jackfruit would be safe because it doesn't exactly fall into the "fake meat" category.