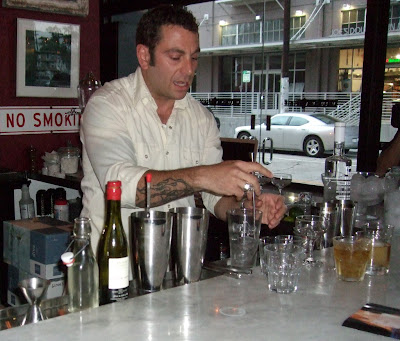 "Ice is the difference between a good drink and a great drink," contends Jon Santer (pictured above). Santer, a mixologist and liquor consultant who led Monday night's Ice 101 seminar for bartenders and writers at Church & State, is an ice zealot along with Neve Luxury Ice founder Michel Dozois. The mixing session was sponsored by Neve and Grey Goose Vodka. After snacking on some tarte forestiere (at left) and tarte d'Alsace that puts Trader Joe's to shame (don't laugh, theirs is actually quite good too), we sat down at tables

that were fully appointed with all the tools of the bartenders' trade. We tried mixing three cocktails each with regular small-cube ice (Santer calls it, with just a tiny sneer, "deli ice"), and with Neve's large-cubed special cocktail ice in cube and rectangular formats.
Our table did have Golden State's Jason Bernstein , who has some bartending experience, but our side of the table quickly mangled the first cocktail, a Diablo with creme de cassis, tequila and ginger ale, by dumping all the cassis in at once. 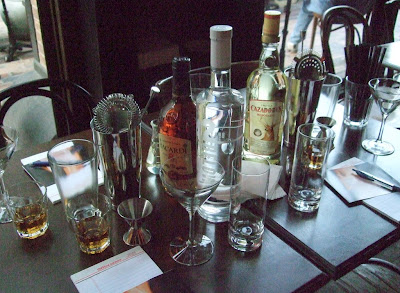 A proper mixing set-up was provided at each table

Still, we got the gist, which is that cocktails diluted by regular ice taste, well, diluted. A cocktail with one big pretty cube in it doesn't melt as fast, and the flavor of the alcohol and juices stays distinct and pure. In a regular cocktail, "The best sip is the first sip," said Santer, before the ice melts too much.
All that mixing was quite tiring, so we were happy when a buffet of juicy steak 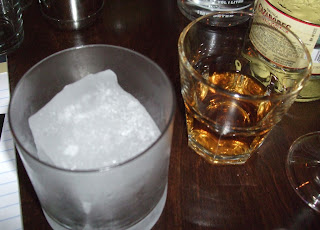 and super-crispy frites was served. Then it was back to mixing up martinis and daiquiris, which came out quite well, and a rather complicated explanation of mixing in stainless steel cocktail shakers with and without a glass. Our table concluded that stirred was indeed better than shaken in many cases. Neve ships its special Godzilla-sized old-fashioned ice cubes (at right) and tall, rectangular collins/hi-ball ice to bars and restaurants throughout the country.
If you're a home mixologist, you might want to try making jumbo ice and see what difference it makes in the quality of your cocktails.
Another thing made clear by the ice evening: I must stop dillydallying and get to Chuch & State very soon now for more steak frites and tarte d'Alsace.
at 9:16 AM

Been meaning to get to Church & State and now you have convinced me to get a move on it. Steak and frites, here I come!
Those big solid ice cubes are better at maintaining flavor but as a former bartender, I think of the logistics too.

That is too funny we met the Ice Man a couple of weeks ago. He is a French Canadian engineer.
He knows his ice and, more importantly, he knows he drinks.
http://uncouthgourmands.com/2009/05/18/opening-weekend/

i friggin love Church & State. it's one of the few expensive restaurants in LA that gives you your money's worth.


We bumped into your blog and we really liked it - great recipes YUM YUM.
We would like to add it to the Petitchef.com.

We would be delighted if you could add your blog to Petitchef so that our users can, as us,
enjoy your recipes.

Petitchef is a french based Cooking recipes Portal. Several hundred Blogs are already members
and benefit from their exposure on Petitchef.com.

To add your site to the Petitchef family you can use http://en.petitchef.com/?obj=front&action=site_ajout_form or just go to Petitchef.com and click on "Add your site"

wow, this looks like a fun experiment to play with ice like that.... still need to get to church and state!

You can buy this ice for $30 a bag at Bar Keeper in SilverLake.