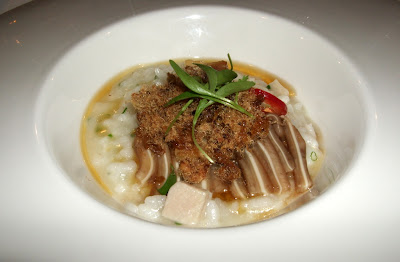 Downtown's South Park/Staples-L.A. Live area is still feeling rather corporate and sterile. But things are starting to perk up around the edges, with lively wine bars like BottleRock and Corkbar providing a more sophisticated alternative to the area's oversupply of sports bars. Tuesday night's media tasting at BottleRock in the Metropolitan Lofts showed off some of the dishes chef Jared Levy has introduced, along with general manager George Skorka's always-excellent wine selections. Downtown's BottleRock has a different feel from its original Culver City brother, with a series of intimate, low-ceilinged rooms lined with bottles of wine for sale instead of one large store-like space.
With a real kitchen available, the menu is more ambitious, with dishes that reflect Levy's stints in Japan and at Providence and Blue Velvet. The tasting menu was lovely, with imaginitive combinations like fava and pistachio falafel and agnolotti with bacon and dates. I'm not a huge chardonnay fan, but the Kalin Cellars Sonoma County chardonnay was really full and pleasant. There's also a choice selection of microbrews selected by Red Carpet Wine's Alex Macy.
To me, wine bars are more fun for informal get-togethers rather than for complicated dishes, so I would point you to Rush Hour menu from 4-6:30 Monday-Friday, with Truffle grilled cheese for $6 and a 3-cheese plate for $9, and to Bottlerock's solid selection of cheese and artisan and house made charcuterie.
BottleRock Downtown
1050 S. Flower St.
Downtown L.A.
(213)747-1100
at 8:02 AM

Next door is Rivera, which is my favorite restaurant in downtown LA, and not that expensive either. Definitely must sit at the chef's table and watch the show.