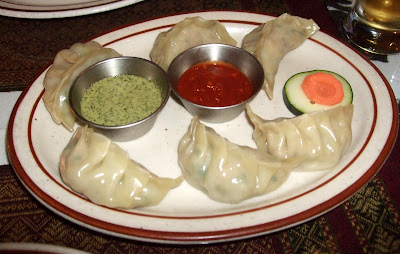 Eating at Tibet Nepal House for the first time, I couldn't help but imagine how cool it would be if the cozy storefront was a real Nepalese themed restaurant: The power would only be turned on for alternate evenings, grimy urchins would make the rounds selling Chiclets, while a huge dessert menu would offer apple strudel and German chocolate cake to stoned backpackers. Oh, right, we're in Pasadena here, not Katmandu. 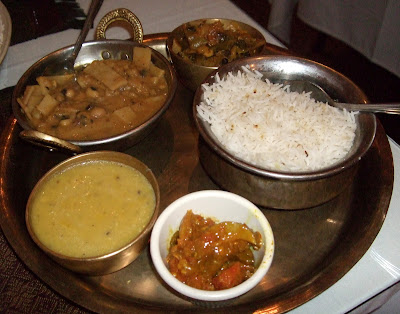 Old Town Pasadena is decidedly less exotic, but while it has a reputation as a restaurant wasteland, Tibet Nepal House is sufficiently quirky and ethnic to make it worth a try if you're in the neighborhood. With Tibetan prayer flags and some bronze buddhas, there's a bit of ambiance to help you forget all the surrounding chain stores. And what's not to like about a place with a large "We serve yak!" placard at the entrance. Actually, we weren't in the mood for yak, nor for thukpa, the sturdy roasted wheat pasta native to Tibet. So we started with the steamed chicken momo dumplings, basically like Chinese dumplings with Indian dipping sauces.

I had a daal-bhaat takkari plate, basically the same vegetable curry sampler as in an Indian restaurant, but the spiced cabbage had a different flavor than an Indian dish. Matt tried Tibetan 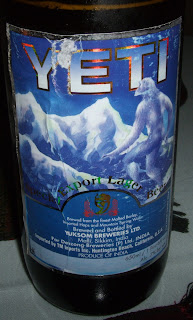 chicken phing (above), quite a tasty noodle dish reminiscent of pansit. The menu at Tibet Nepal is huge, divided into Nepal cuisine which is quite similar to Indian but a little heartier and heavier for the cold winter nights; and the doughier Tibetan cuisine. I'm not sure which country the goat fried rice hails from. OK, we skipped the butter tea also, so I guess we missed some of the native specialties, but at least returning to Old Town will be a lot easier than a trip to Nepal. Matt likes fictional beasts, so he had to try a Yeti beer, which went well with the mildly spiced food.
The best part: The noodles with some sriracha made a wonderful lunch the next day at work. Prices aren't rock bottom here, due to the location, but we had a lot of food plus a Yeti for about $45.
Tibet Nepal House
36 Holly St.
Pasadena
at 6:25 PM

Next time you're in town, please stop by one street over at POP Champagne & Dessert Bar. We would love to have you.

I have been there three times, and that is enough. The food is decent (when it actually arrives.) But the service has ranged from indifferent to actually seeming angry that I was there. Many people I know love the place, so maybe I just have been unlucky. But not one of my three experiences was even close to pleasant.

i wish i could visit this place soon

I've been there twice. Yes, the service is beyond slow (bring a book), but where else in SoCal can you get butter tea and yak? A fascinating experience, and the food is quite tasty -- if you have the patience to wait.