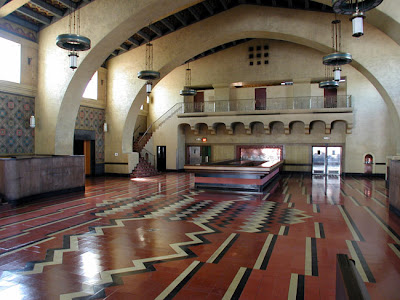 It's good to see the Times keeping up the history articles in the face of shrinking editorial space, not to mention giving Steve Harvey something more interesting to do than the goofy signs beat. Today Harvey (any relation?) tells the story of the historic Fred Harvey restaurant at Union Station, closed since 1967. The headline, Business still booming for an old railway restaurant is kind of misleading, since it's only used for private events now, but at least it's well preserved.
A few years ago, after I went to a great Society of Culinary Historians presentation about Fred Harvey restaurants, which were generally located near train stations from the 1880s to 1940s or so, I made sure to try El Tovar at the Grand Canyon, one of the few still in operation. If you ever get there, I recommend the blue cornmeal pancakes with prickly pear syrup.
Have you ever eaten at a Fred Harvey restaurant?
Also, does anyone know about a recent posting soliciting proposals for another restaurant at Union Station? I can't remember where I read about that.
at 9:10 AM

I too ate at El Tovar at the Grand Canyon and loved it. My husband had a buffalo carpaccio (sp?) appetizer we could not believe - so tender and flavorful. And they had molded butter pats - how civilized!

Sadly, that's the only Fred Harvey restaurant we've eaten at, although my mom has very fond memories of the Fred Harvey tearoom in Clevelands Terminal Tower (a train station.)

I went on an extensive tour of the train station with the L.A. Conservancy a few months back. I explored every INCH of that shut down restaurant, the bar area was wonderful! I got creeped out in the kitchen, but otherwise, it's a lovely space. So swank. Glad people are holding events there, but oh it would be grand to have a supper club there!

My grandpa worked at the Fred Harvey at the Cleveland Terminal Tower in the late 60s/early 70s. Restaurant was called the English Oak Room; he was the "meat chef." I have a couple of menus if you are interested. Years ago, Larry Nicola (Nic's and the new Mexico, http://www.gogomexico.com/) wanted to open a restaurant in the space and seriously pursued it.

Very cool! Having now been to Union Station twice(!) this month, would love to see as much of that space opened up as possible.

Do they not want to compete with Traxx?

I had my wedding reception in this event space, it really is spectacular. Happy to share some photos of the space if anyone would like to see more.

I would love to see your reception photos from Fred Harvey. My fiancee and I are seriously considering hosting our reception there as well.

Here you go! My reception pics at Fred Harvey - feel free to post any questions or comments on the photos - happy to help answer.

I am getting married in that same room this year. Was wondering did you have any lighting companies come in to set the mood lighting? I was debating if I should hire one?

BlueBondy - Yes I did - I'd highly suggest it, one of the best uses of our budget was on lighting. The used light to brighten the crossbeams/pillars and pinspotted each table.