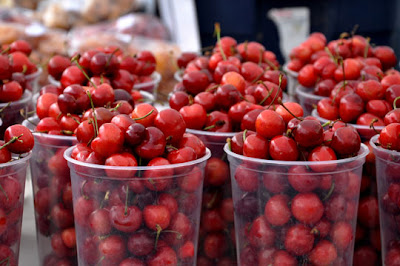 Echo Park cherries from the Kitchn
After a scare about $25 corkage, the first reports on Domenico are rolling in with reports that corkage is actually $10. As yet, there's no liquor license for the Italian in the former Michelangelo space on Silver Lake Blvd. The website doesn't have the menu posted, but there's reports of artisan fusilli with wild boar ragu.

Hairy hipsters get ready for the launch of Territory BBQ and Records in this report from the LA Times. Owners Curtis Brown and Tony Presedo promise rock-bottom prices for the cue. Yee-haw for that!

Emily at the Apartment Therapy Kitchn blog spotlights the Echo Park Farmer's Market. I haven't been to that one, but here's EatingLA's reports on the Alhambra and Pasadena markets.
at 3:39 PM

re: Domenico - went last night and there was no corkage at all. Some of the food was spectular, some a little blah.

the facade of domenico looks really nice, though a full visit is in order. especially with that low corkage - a visit to SLW and you're good to go!

I was at dominco's the other night and was told the corkage is free until they get their liquor license.