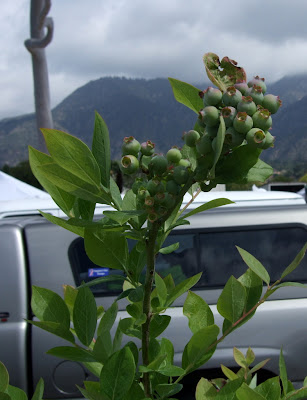 The Pasadena market has a large selection of vegetable plants, flowers, and even blueberry bushes. It's also nicely situated against the San Gabriel mountains.

Each farmer's market has its own character and rhythm, and with over 100 in L.A. county, it's hard to get to know more than a handful. Every so often, instead of running in and quickly snatching up my strawberries and cauliflower, I like to wander around with a camera and pretend I'm traveling in a faraway city. Today's destination is the Saturday Pasadena market at Victory Park, which is likely one of the biggest after Santa Monica and Hollywood. Parking is nearly as challenging as those on the Westside, but once inside, the mood is more mellow than the other big markets. 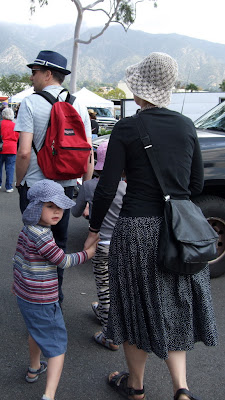 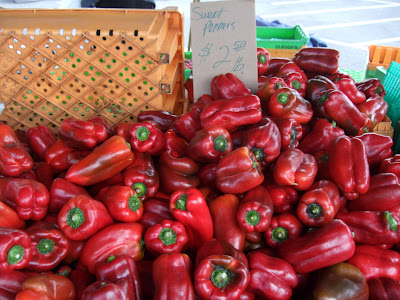 Southern California is confusing -- isn't it the wrong season for red peppers?

I roasted these sunchokes and doused them in garlic lemon butter. 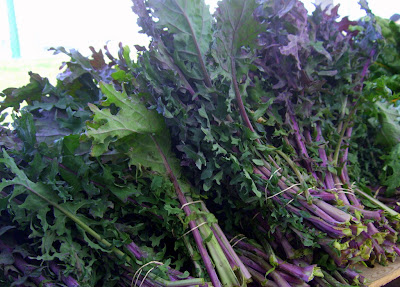 This black kale looks completely different from the cavolo nero on the Internet, but it's just as good and much cheaper than the kind at Whole Foods.

Prepared food is not the strong suit at this market, other than a popular pupusa stall. Other stalls include the fresh fish truck, chocolates, really inexpensive eggs and some very popular guacamole.
Tip: Go early in the summer, as it gets hot fast. More spaces are usually available in the lot on Paloma St. rather than on Sierra Madre Blvd. Are there any other vendors here that shouldn't be missed?
at 8:50 PM

I don't like dessert or really much of anything sweet, but the guy who sells granola also makes my favorite cookies around. I like the oatmeal raisin best, although my friend swears the chocolate chip are the best he has had.

the lady that sells mushrooms! my two closer markets (montrose and la canada) do not have a mushroom vendor and that gets me driving the extra minutes some weekends from la canada!