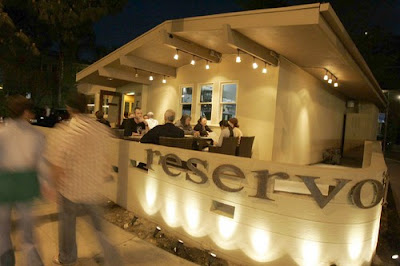 I haven't been to Reservoir yet, but S. Irene has. Her Early Bird look concluded that despite poor pizza crust and retro balsamic vinegar overload, a so-so burger and a seemingly sarcastic swipe at the pan-seared tofu, it's relaxed and fun and a real neighborhood restaurant.
J. Gold weighed in with a First Bite too: Reservoir is "casual but almost painfully stylish; farmers market-driven, although not obnoxiously so, and dedicated to the kind of cooking I’ve come to think of as professionalized dinner-party cuisine — recipes that could have been torn out of last month’s Bon Appetit, hearty to a fault...rather over-deconstructed lasagne, stodgy pizza."

That's pretty much the same way I felt about Local, although a meal at Local will probably run about half the price of one at Reservoir, so there's less at stake. Here's an excerpt of my review for the Los Feliz Ledger. I'd try it again for breakfast, as long as there's no pistachios in the breakfast dishes.

Local gets the ingredients right, but the execution can be uneven. The large, floppy veggie burger ($11) is composed mainly of the nutritious grain quinoa—an interesting idea, but on a big bun, the dish turns into starch-on-starch. A dinner entrée of striped bass ($14) is bland atop a doughy potato-corn pancake. Even more problematic is Treviso salad, which comes as a whole head with stem intact, as if it were plucked out of the garden with no further thought of how it could be manageably eaten. Whole pistachios—some with bits of shell dangerously clinging to them—hide in the salad’s creamy dressing.
On the other hand, the heritage pork sloppy joe, more like a pulled pork sandwich, is deliciously piggy in a balanced barbecue sauce, and a side of spaghetti squash is appealingly caramelized with plenty of lemon and garlic.
Local belongs to the endearingly sloppy breed of near-Eastside restaurants—its heart is in the right place, even if service and presentation are almost too casual.

I'm not trying to slam anyone, because I know how hard it is to keep a restaurant going during these times. But restaurants need to also remember that now more than ever, diners are looking for excellent eating and service experiences when they do go out and spend money.
at 6:05 PM

I completely agree about diners being more particular in their choices for excellent taste and service, especially when LA has so many great holes-in-the-wall and great values at some higher end hot spots as of recent. Thanks for the tips on Local!