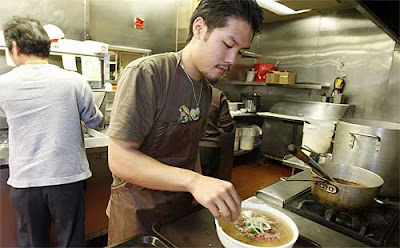 (photo LATimes)
The LA Times profiles Pho Minh, beloved but under-trafficked pho destination of South El Monte, extolled by J. Gold, Exilekiss and many others willing to brave grungy Garvey Ave. What the Times says is true -- when I ate there a few months ago, we were the only customers at lunchtime and the pho was delicious. The problem? Too much competition, and dudes, you're in South El Monte.
Also in the Times: The owners of Mission 261 probably will not re-open unless or until they get their condo project in San Gabriel's Mission district approved.
...and a preview of Trader Vic's, and a Los Feliz-centric My Favorite Weekend from Dominic Monaghan.
at 6:58 PM

it's NOT just the competition. They're also in the back of the strip mall w/ nary an outstanding street sigh. Horrendous location.