Pho Minh: worth braving the wilds of El Monte 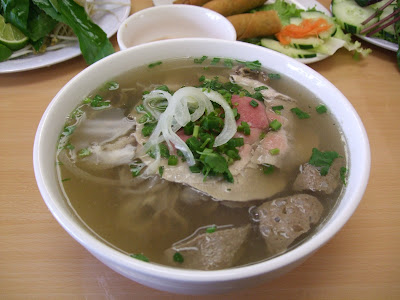 This is what you need when it's cold and drizzly: Pho dac biet at Pho Minh

I'll have to admit I had never been to South El Monte before the recent wave of pho adulation hit the Internets. It's not much farther at all than San Gabriel or Rosemead, and yet South El Monte has a somewhat different, Wild West sort of feeling. Driving up Garvey towards the pho zone, first you come to Alice's Palace, a rickety dive bar with broken beer taps which seems like it should be hanging on to the border someplace like Needles or Nogales. Next is one of the more rustic trailer parks I've seen outside of Fontana. Then, on the other side of the street -- bam! A two story pagoda-style strip mall filled with Vietnamese restaurants and just the sort of smoky, louche cafe where several people were recently shot a few miles away. C'est depayisant! But enough with the El Monte travelogue...Pho Minh was the destination. 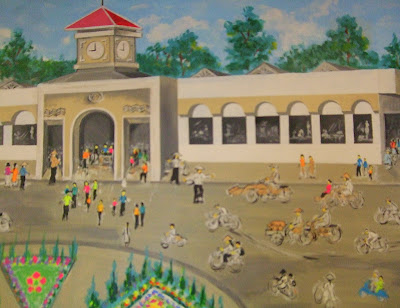 Tucked away at the back of a pagoda-less strip mall, Pho Minh was bigger and emptier than I had imagined from reading the ecstatic reviews from the likes of Exilekiss and J. Gold. But they do make an unquestioningly good bowl of pho for just $6 or so. If you're feeling adventurous, as I was, get the special, which is full of probably more sliced meatballs than you'll be able to eat, as well as tripe, tendon and rare beef. Or you can just go with the rare beef, because frankly, the tripe doesn't taste like much at all. But the broth is nicely fragrant, there's tons of vegetables and it's just generally an excellent bowl of pho. Cha gio egg rolls were thick, crispy and meaty, and I also loved the strong iced coffee, which had a strong chicory note. I'm not likely to get back to El Monte for a while, but if I do, it's going to be hard to tear myself away from Pho Minh. Unless, of course, I need a game of pool, and a stiff, chemical-tasting margarita at Alice's.
Pho Minh
9646 E. Garney #108
South El Monte
626-448-8807

glad you made it down here. Pho Filet just a few blocks west makes 1 of the finest "faux" pho bac in all of LA.. and there's that AWESOME cafe Quynh Nhu just across the street as well.

Gee, I wonder how an out-of-the-way dive like Pho Minh first managed to get on the radar...

We just hit up a Pho joint in Long Beach called Pho Hong Phat. It was my first time there and though I was being adventurous with tripe, but you're right... there is really no flavor in it.

I'll have to venture out to Pho Minh... the nearby environment sounds awesome.

ooh, good to know! we just hit Pho Huynh also in El Monte last week and my word was it awesome! sooo fragrant and filling. looks like they're about a block from each other...i guess we need to return. much better than pho cafe! mucho much!