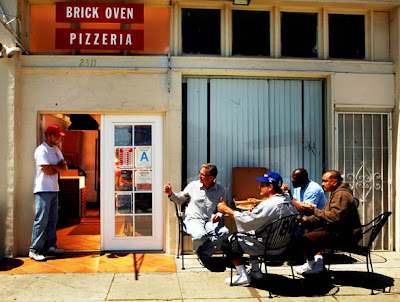 (photo LA Times)
EatingLA hasn't been able to get to San Pedro lately to check out Pavich's Brick Oven Pizzeria, but a friend did. Writer Jonathan Blum ate there with his winemaker uncle and and EuroPane's Sumi Chang and sent this nicely-observed report:
We drove down and stopped first at a nearby park in San Pedro, Angels Gate, which has a giant "peace bell" that was given as a friendship gesture by Korea to the United States on the occasion of the bicentennial. A wedding was going on. We walked around the park a bit, which overlooks the ocean as well as the Port of Los Angeles, but the wind was a little chilly so we didn't stay long. Then we found the pizzeria, a modest storefront right in the middle of a hilly middle- to lower-middle-class neighborhood of apartment houses, bungalows, and other single-family homes. A couple storefronts up from the pizzeria was a closed shop called Baltic Bakery.
A couple storefronts in the other direction was a slightly seedy laundromat. The late afternoon Pacific light was very lovely. Groups of neighborhood kids were constantly milling about along the sidewalk, and people were regularly coming and going with orders from Pavich's to go.
The shop itself is long and narrow, with the offerings handwritten brightly on a board above the head. The proprietor, an immigrant about 40, seemed to be shyly amused by the attention the LA Times article has recently brought to his business. The place offers both Croatian comfort food and Croatian-style pizza. We started with cabbage rolls, terrific stuffed cabbages with spicy ground beef, served with mashed potatoes, a mushroom gravy, and julienned roasted red peppers. (I grew up eating Ashkenazic Jewish food, and so I consider myself a tough judge of stuffed cabbage, and this was very good.) I also wrote down the names of two items we didn't get but whose names I liked so much, I assume the dishes themselves will live up to their names: chavapchichi and plyeskaritza. And then we had a vegetarian calzone and a huge (18") combination quattro gusti/Croatian pizza. On the wide sidewalk in front of the shop there is a grill for grilling sausage and a couple metal tables; we brought tablecloth, napkins, silverware, and wine, and set up on those two tables and had a great time. Some people take the food out and bring it to the park. My uncle brought a 2005 zinfandel he made; then he impressed us by knowing that the zinfandel grape is originally from Croatia. The crust on the pizza had a desirable crunch, and the toppings--it was a half and half, with smoked meats and vegetables--were yummy. There was something very charming about the whole experience. I recommend taking some friends down there sometime when you want to get away from our part of town and have a well-crafted, unpretentious, tasty meal; it's a great neighborhood place, a fine adventure.
-- Jonathan Blum

Odd. that's the exact same combo of pizza I ordered.

and Korean Friendship Bell was exactly where I visited before Pavich's.

Charming indeed. There's just something very odd about the pie tho. Toppings were great. Crust was... I dunno.

I almost snagged your photo Tony! I'll have to instruct my guest posters to take more photos next time.
Have you been to Two Boots? That crust had an odd taste to me also.

Awesome write up on Pavich's. There's a lot of good hidden eats in San Pedro, it just takes a little adventuring about to discover them... or being a local.