Cafe Bravo: A fine choice for vegetarians and meatatarians alike 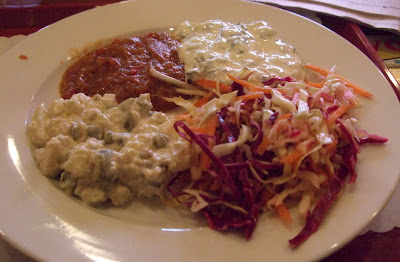 After Kathy's guest post about the "sizzling meat aroma" at the newly-opened Cafe Bravo in Silver Lake, a vegetarian commentor opined that it was not a helpful post for veggies. But nearly all Middle Eastern restaurants have a large selection of vegetarian dishes, and Cafe Bravo is no exception. So I thought I'd blog about my (nearly) vegetarian lunch there just to keep everyone happy. Although a woman did walk in and say "It smells so good in here!," I didn't find the meaty smell that pervasive. Cafe Bravo's menu is somewhat different than some other Armenian/Lebanese restaurants like Zankou Chicken. There's no rotisserie chicken, and no falafel. So what's a veggie to do? You can choose from a hummus and grape leaves sandwich; a vegi plate with hummus, tabbouleh and stuffed grape leaves; a vegi kabob with hummus and rice or go for more variety with the Bravo salad sampler. Cafe Bravo breaks from the usual menu with a a choice of 10 different salads, and you can mix and match four for $6.50 including pita bread. It would be easy to go all-vegan, but I opted for yogurt with spinach, cabbage salad, ikra (roasted eggplant, bell peppers and tomatoes) and Stolichnaya salad, which adds chicken to potato salad, so ok, it wasn't completely vegetarian. But there's also bean and corn salad, as well as fattoush and Greek salad. I loved the thick, creamy yogurt which was seasoned to complement the spinach, and the cabbage salad with carrots and lemon juice was healthy and refreshing. But my favorite was the Ikra, a kind of Middle Eastern ratatouille, with super-smoky eggplant and deep carmelized onion flavor. Next time, I'll try the lentil soup, which is just $2 a cup. As far as meat options, there's kabob plates and kabob sandwiches of chicken, Cornish hen, beef, pork and lamb, chicken shwarma and beef shwarma. It's not fancy inside, but there's plenty of tables to eat there and they seem to be doing a brisk takeout business as well. Silver Lake seems very happy to get a place with freshly-cooked, healthy food where nothing on the menu costs more than $8.50.
Cafe Bravo
2662 Griffith Park Blvd. (next to Hard Times Pizza)
323-912-1111 (closed Sunday)

Chowpatty: The Ikra is terrific, I absolutely enjoyed it. However, I also had the lentil soup, which IMO, is way tastier, and fresher than a similar one at Elena's in Glendale (which gets a lot of love on Chow, but I find all their entrees salty for my taste). Bravo, OTOH, is a great addition to the neighborhood, and for less than $20, you can get a great meal (I also love their $2-3 extra skewers)!

The lule was disappointing, but the shawerma was bad. Clean looking place with plenty of dining space, but there are plenty of places nearby where the food is enjoyable.