Around the blogs: Barbrix on track; the Lab; communal tables

Barbrix on Hyperion, which was delayed by the inevitable permit and parking snafus, is on track to open in April, says co-owner Adria Blotta. Here's some more details from EaterLA, along with a bizarre comment thread. And yes, it was a Scientologist school before (it moved just down the street)...but why would anyone care? Don Dickman, former chef at Rocca in Santa Monica, will do "a changing Meditarranean/Californian menu" of shareable plates. We're just happy wine will be $5-$9 a glass, rather than the 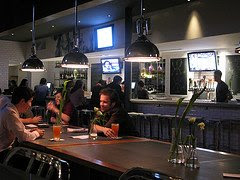 over-$10 prices at many local winebars.

CarolineonCrack stops by The Lab gastropub, a new USC-run watering hole she calls Baby's First Gastropub. It doesn't sound perfect, but I'm sure it's a lot better than the previous choices in that neighborhood.

Grubtrotters looks at communal dining tables around L.A., mostly on the Westside. Are there any other good communal tables around the near-Eastside? I like the one at M Cafe de Chaya on Melrose, and then there's Canele, too.
at 12:01 PM

Rivera downtown has a large square table with views into the kitchen.

The new Yxta Cocina Mexicana downtown has a big communal bar/dining table and, also downtown, Wurstkuche has about a 30-foot-long table.

I recently came accross your blog and have been reading along. I thought I would leave my first comment. I dont know what to say except that I have enjoyed reading. Nice blog. I will keep visiting this blog very often.