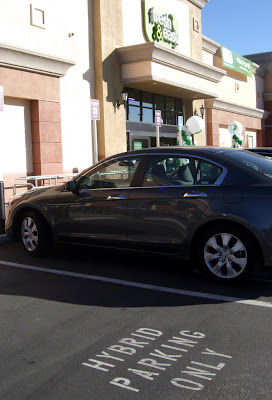 Alhambra's new Fresh & Easy wasn't relatively uncrowded compared to the first few days when I visited early Saturday morning. Just as she predicted, the first person I saw was Pam from the late and lamented Daily Gluttony blog. She and her baby and husband were taking advantage of the "Adults with children" spaces right up at the front of the parking lot, which is a nice touch, as are the hybrid parking spots. But I'm still having a slightly hard time getting my mind around Fresh & Easy's product selection. I was surprised to see several cheeses from Cypress Grove -- they were in stock on the wonderful Humboldt Fog and it looks like they'll be getting Midnight Moon and a few others, which is reason enough to shop there, since the prices will probably be lower than Whole Foods. The rest of the cheese selection is uninspiring though, while the meats are generally better. Is there a big demand for bresaola in Alhambra? I hadn't realized. Somehow the prepared and frozen foods didn't really appeal to me, but I'm sure they're helpful for people who can't cook.

I noted a few interesting products I hadn't seen before. Crispbakes are some kind of breaded amalgam of potatoes, bacon and chicken, or a breaded chili beef patty...is this some kind of British invention?
I'll also be surprised if they sell a lot of salmon croquettes. Nature's Nosh looks more promising -- it's a refrigerated plastic box with either chopped fruit or edamame that you top with nuts for a healthy snack.

It seemed a little pricey at $2.99 since you could easily throw this together yourself, but a nice idea anyway. I also liked the "grill pack" which is a big plastic box full of burgers and sausages -- you'd be the hit of the BBQ if you showed up with that. There were people helping put the items through the automated checking machine as well as bagging, which I'm sure won't last long, but they were very friendly. I could see going back from time to time, since it's more convenient for me than the Glassell Park one. Which of the prepared items are decent?
at 5:09 PM

They'll probably continue to help people bag their food - they still do over on Eagle Rock Blvd.

I'm not so sure I like that hybrid parking space idea - not sure I'd respect it if I needed a space. Seems kinda arbitrary and way too politcally correct to suit me. The spaces for people with little children make a lot more sense. That's just kindness and I can embrace that.

The parking space thing really irritates me for some reason. Maybe if feels as if they don't particularly value me as a childless, non-hybrid driving customer. I know these spaces certainly predisposed to dislike Fresh & Easy before I even got through the door.

If there was one nearby to me, I might stop occasionally, but they are too sterile and as someone who usually cooks, the selection doesn't really inspire me.

Is the store layout any different? I had read somewhere that Fresh & Easy was considering changing the layout.

Too much plastic and packaging on items that don't need it, plastic box and paper wrapper!!! Huge environmental faux pas, yet they offer parking spaces for hybrids? GREENWASHING!!!

I wouldn't shop there for that fact alone, food shouldn't be wrapped 2 to 3 times. The waste, natural resources, time, and money used to wrap that one item for one person to eat destroys way more than it ever feeds.

Stop being lazy supproters of these types of stores that are the main problem with society right now --LAZINESS, ENVIRONMENTAL DESTRUCTION and GREED.

I dare you to save the wrappers/boxes from one bag of groceries from this store and force yourself to look at it. Think about all the additional resources it will take to recycle that plastic, just because its recyclable doesn't make it less cost or resources than recycling cardboard or having nothing to toss at all.

Think about it and try to cook more and buy fresh food from your local farmer's market, taking your own bag with you.

Get with it people.

Nice to see you yesterday, Patty!!! I'm probably in the minority here, but I actually like F&E. I didn't know what to think about it the first time I went either, but I think once one gets past the sterile atmosphere & packaging (whose design & font makes their stuff look waaay generic), it's not bad! Their everyday prices on brand name products are usually cheaper than most mainstream supermarkets (e.g. Ben & Jerry's pints for only $2.59). I actually like their Indian frozen dinners--they have one w/ paneer cheese and a couple w/chicken. The basmati rice in them is yucky so what we do is make our own basmati rice to go with. I admit that my food standards may now seem questionable, but they make for a super quick and tasty-for-frozen dinner on days where we've both worked long days & literally have only 2 hours when we get home to spend w/ baby & do other stuff before hitting the sack. I also like their ready made dessert section--I frequented that alot when I was preggo. :) Am I going to stop going to Trader Joes for low priced specialty & convenience foods? Hell no! But I will definitely add F&E to my usual shopping rounds.

Oh and BTW, your other commenters are probably going to throw rocks at me, but I happen to loooove the "adults w/ children" and "hybrid car" parking spaces up front since I AM a mom AND drive a hybrid. Nyah! ;P

Very uninspired from my perspective, meaning Van Nuys as well as the Hollywood Galaxy locations being my benchmark.
Just so strange a mixture of stuff that I would seldom use or need.
Not a cheese lover, so even that is not an allure.
Even TJs has look much of its allure, from a similar perspective. I can cook, and they seem to be focusing on those that cannot. And there wine sucks.

wow, looks like your blogs attracted the Greenpeace type (even though I agree that their packaging, convenient as they are for single people like me, is a bit excessive), as for their packaged foods, nothing really jumped at me though I did like their onion bhajis and their bagged salads... oh, and their roasted banana gelato.

Their Princess cupcakes were not too tasty. :( I enjoyed their tea selection though.