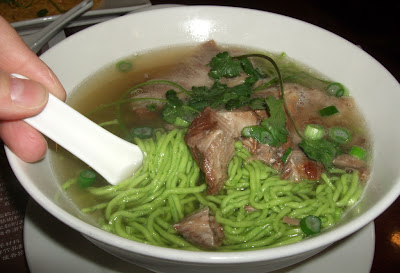 I like the name Bamboodles, because it's easier to remember than most Chinese restaurant names. ("Do you want to go to Best Szechuan?" "No, I want to go to Szechuan Best!") But while 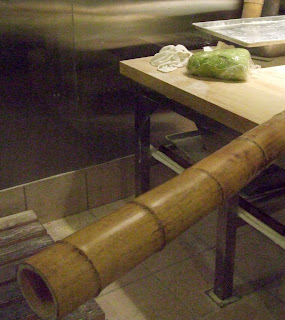 the name might seem kind of gimmicky, Bamboodles is a serious temple to noodle artistry. It took over a San Gabriel Valley Blvd. strip mall space that I believe might have housed a fairly dubious Hunan place last year, and it's a great improvement. Here's the drill: Bamboodles makes handmade thin noodles, using a huge bamboo log (left) to shape them. Green tea noodles are sort of a signature flavor, but they also make spinach, carrot, plain, extra egg and black sesame (below right). You can get them in a rich pork soup, for a similar effect to pork ramen; in beef or chicken soup or on a plate with spicy beef, shrimp or pork lo mein. To start, we tried the garlicky cold seaweed and potatoes, recommended by 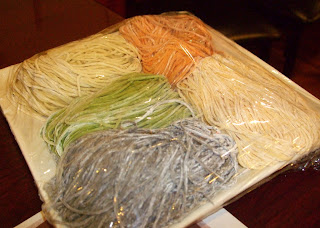 Exilekiss, who first wrote about this place in an enthusiastic Chowhound post. It was nice to have a cold dish to return to between bites of noodles. Then we chose spinach noodles in pork soup, which came out in a wonderful green color, since they use fresh spinach. The pork was tender, the broth lightly perfumed, perhaps with anise -- this was a nice bowl of noodles with a good bite to them. Carrot noodles ( bottom left) came on a plate with a cup of spicy beef on the side -- the beef sauce was a bit greasy and the beef could have been a bit more tender. But this dish really came alive when 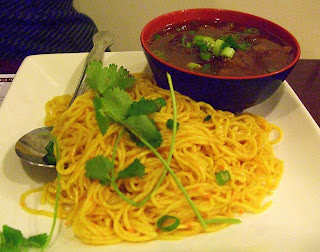 a dash of soy sauce and a dash of red vinegar was added to the mild carrot noodles, and we scooped up every bite. Although there were just two of us, we also managed to down an order of House special dumplings. Matt liked their rustic, homemade wrappers and pork filling. They aren't the very best dumplings in the area, but even ok homemade dumplings can be pretty good.
Verdict: Bamboodles wasn't nearly as crowded as most of the other places on Valley Saturday night, perhaps because the menu is fairly small and specialized. But we had an amazing quantity of nicely-crafted noodles and sides for $27, and I'd say this place is definitely worth trying. Also, it's very user-friendly, with a helpful waiter who shows you the different types of noodles and explains how the menu works.
Bamboodles
535 Valley Blvd.
San Gabriel

This place looks great! I love the name, too. I think that Chinese restaurants would do well to be more original with their names.

Great review of this place. :) I'll have to go back and try their new noodle flavors (Carrot, Black Sesame and Extra Egg). I'm glad you enjoyed it overall; I can't wait to go back. :)

i just tried this place because of your review. it was really excellent. when we walked in there were no other customers. i tried the chicken noodle soup with spinach noodles and my bf tried the cold spinach noodles with veggies. the food was out very quickly, warm and flavorful. the flavors were simple but very good. during the meal the waitress brought out a sample of some cold appetizers, a tofu and bean sprouts with spicy oil, celery & peanuts in some sauce i have no idea but was amazing, and a potato and seaweed with garlic sauce. i wish i had pushed her more for the names of the sample dishes because they were outstanding and worked well in combination to our main dishes.

the restaurant is bright and simply furnished. nice black and white photos of the noodle making process with bamboo accents.

we drove from eagle rock, and would do so again.

Did anyone notice if they had beer or sake?

No, they just have a few types of tea, coffee and soft drinks. They might let you brink beer if you call ahead, they seem pretty accomodating.