SLS Hotel: Totally over the top 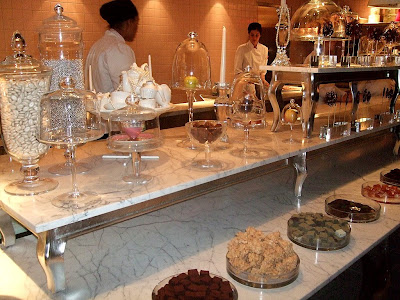 The dessert bar offered bites of sweets with distinctive flavors

Perhaps it was a last gasp of capitalist excess, or perhaps there's another L.A. where people live like this all the time. But for this blogger, the SLS Hotel opening party last night was actually a respite where I could spend a few hours not thinking about all the deep media layoffs of yesterday. 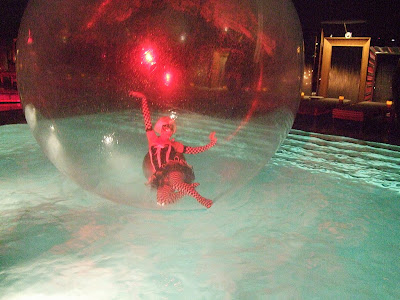 At the rooftop pool, a dancer spun in a floating ball

Instead I was able to contemplate, with about 1000 other guests, just how to shoot the test tube of shrimp cocktail sauce down my throat while eating a shrimp at the same time, and whether I should tell the willowy young blonds that the cotton candy they were childishly excited about actually had a core of molten foie gras at the center. 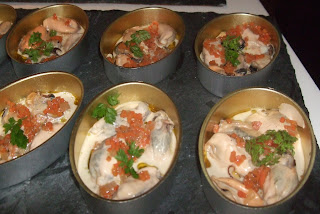 Designer Philippe Starck outdid himself, with hundreds of whimsical chairs and objets strewn about the lobby -- I like the accent on Fornasetti -- and executive chef Jose Andres offered some amusing tastes of his molecular tapas or whatever they're called.
Highlights were Kumamato oysters with lemon air, aromatic mussels in darling sardine tins (left), popcorn frozen in liquid nitrogen, luscious chicken croquetas and a beautiful array of dessert bites. 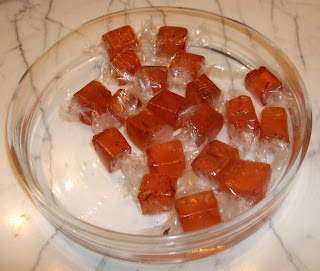 I don't like big, sweet, chocolatey desserts, so the little squares of sesame candy, lemon marshmallows, saffron gelees in edible paper(right), exquisite pates de fruits and pop rocks chocolate were just the ticket to graze on.
Is Los Angeles burning? Let them eat lemon air!
at 8:17 AM

how does that dancer get out of that ball? And doesn't she suffocate? weird...

Sounds like a memorable event. Always nice to find foie gras in unexpected places. And the Bazaar dancer in the bubble: bizarre. Nice job of capturing the scene.

The dessert bar wasn't open on my first visit. I'm going back on monday and can't wait! Thanks for the post.

Wow! Sounds like an interesting evening! I'm fascinated by the woman in the ball too.