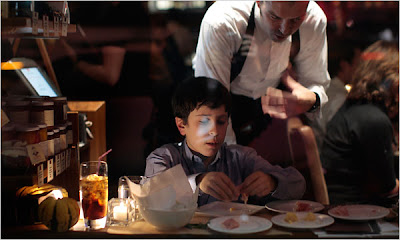 Variety's Mike Fleming reports that the article just two weeks ago about the 12 year old kid who's an aspiring food critic will become a feature film for Paramount, produced by Lorne Michaels and John Goldwyn. New York pre-teen David Fishman goes out to eat by himself when his parents work late, goes to schmancy Fieldston school and loves seafood. I'm not sure how that makes a whole movie, but it proves, all you need is a gimmick. I can't believe the kid doesn't have a blog, though.
Meanwhile, if you're waiting to see Meryl Streep as Julia Child in Julie & Julia, the opening has been moved from April 2009 to August 2009.
at 8:05 PM

I honestly don't think it's that compelling. bourgeouis little kid from the upper west side already a snob? They should do a movie on glutster instead. Street-smart latino kid from East LA who rises to foodie stardom in LA's restaurant scene. :)

I bet it's better than No Reservations though..

Still a great story, maybe Hollywood is running out of fresh ideas

Bollywood movies are in: Slumdog Millionaire for Best Picture. No Reservations was cheesy and the production qualities were cliche. Too much Phillip Glass on the soundtrack and too much over-romanticization of New York City. We need Depression-Era type films now - coming of age, Dickensian stuff that inspires people despite hard economic times.