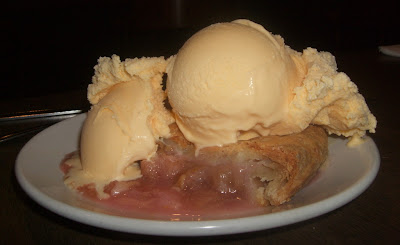 I hadn't stopped by Pie 'n Burger in quite a while and it's actually open until 10 at night, which is pretty late by Pasadena standards. So three of us stopped by for, what else, burgers and pie the other night to see if it's still up to snuff. Pie 'n Burger in the evening is a bit dreary, with hardly anyone at the counter and just a few tables of earnest looking folk looking like they might have just come from the Sierra Club meeting. As with all great, old classic places there's a few quirks to get used to: it's cash only and oddly, they don't serve cole slaw, which I generally use to meet my vegetable quota in diners. And the fries are deceptively good-looking --they're crisped to a delicious-looking golden hue, but they don't have a lot of taste. 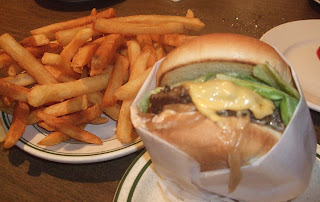 But you're there for the burger, and although it's over $6 by now, it's definitely worth it. With a healthy swatch of lettuce, some secret sauce, grilled onions and cheese, the toppings achieve a perfect interplay with the flat, charbroiled patty. The Apple Pan's patty has more flavor, but the edge goes to Pie 'n Burger for the overall burger satisfaction quotient. It's what you want when you want a hamburger, and not every place can claim that. Sam ordered the rhubarb pie, which was topped with way too much vanilla ice cream. I'm sure the rhubarb wasn't fresh, but for someone who lusts after fruit pies like my son, it hit the spot. I like the breakfasts there too, and it's a good deal cheerier when it's a bit more crowded. At this point, it's worth it just to go somewhere that's stayed much the same for 45 years.

For me, the Pie 'n Burger has the BEST, BEST, BEST tasting hamburger in the greater LA area. I only wish I was in Pasadena more often so I could frequent the place!

I think you like the Apple Pan's burgers because you grew up on the Westside (so did I). We usually think that our childhood food is always the best. I say, "Feh". I think their burgers are tasteless. AP makes a great tuna-salad sand though.

I do agree that the Pie n' Burger could use an interior paint-job!

Apple Pan still rocks. I grew up there, don't live there now, but still think it's great. Never been to P&B, but was working in Hollywood all week and managed to sneak in two burgers from 25 degrees (at the Roosevelt) in a 2-day period.

IMHO, 25 degrees has better burgers than anywhere else in the city -- maybe the country.

Thanks for this, it's been a few years for me and I found a burger loving friend who has never been, so we are going to visit P and B tonight!

How funny Pat, the three of us were there this weekend too. Delicious and sinful as usual.

we used to go there b/c of the nostalgia factor and we really, really wanted to make it work for us again. but the servers there carry quite an arrogant attitude, almost to live up to the "reputation". good burgers, but personally, i want to enjoy the dining experience too..even if its a dreary old place!