Are you going out on Election night? 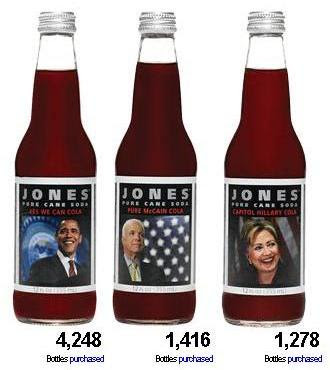 I'm sure most bars with TVs will be welcoming election night patrons, but some places are putting the word out for specials. Judging by some of the special election concoctions, there's going to be headaches Wednesday no matter who wins! Here's a few so far -- if you know of others, leave them in the comments.

Blue on Blue at the Avalon Beverly Hills is offering $8 drinks and aps like a Conservative Quesadilla, a Palintini and a bright blue Obamarita with blue curacao, vodka and prosecco. So many places this year are doing election polls via cupcakes, sodas and drinks, and Blue on Blue had a landslide for Obama with its Obamarita. Or maybe it's just that the McCainade, with Jim Beam, amaretto, lemonade, iced tea and grenadine sounds kind of gross.

The Edison is having a party from 8 pm -2 am sponsored by Causecast, with a $5 suggested donation.

Pitfire Pizza is hosting a related event at all three locations, with a $12.99 salad, pasta and dessert special. Plus with an "I Voted" sticker, you get a free Jones soda or draft beer.
at 12:36 PM

LAist seems to think the freebies in exchange for a sticker are against the law...Hmmm.

i'm all about the house party... don't want to get in to fights with people at any restaurants or bars.

Even more freebies/deals/specials on Eater LA

Starbucks is giving a free tall coffee to anyone who shows their sticker - or simply says they voted.

I know there are more offers out there, but this is just what I remember...

All Daily Grills across the City are having specials on appetizers tonight.