5 things I learned at the new Bar Delux 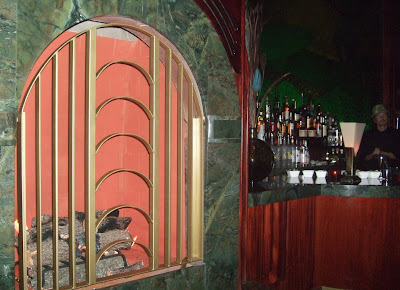 A green marble fireplace anchors the bar at Delux

Last night I made a very quick pitstop at the opening of Bar Delux, the swanky new lounge on Cahuenga from Adolfo Suaya. The lush deco style is by Kris Keith of Spacecraft, who has designed spaces as diverse as La Buca and the Delux-adjacent Kitchen 24. "I don't have a signature look," says Keith, who is working on a clutch of new spaces in Hollywood. To wit:

1) Stout on Cahuenga will be a beer bar with dozens of beers on tap and "great burgers," replacing Karma Coffeehouse.

2) Also coming to Hollywood next year: Osaka, a lavish Peruvian restaurant with a 50 foot ceviche bar. That's a lot of ceviche! Are Hollywood trendies ready for Peruvian? 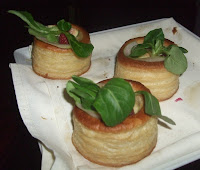 3) Eric Greenspan from the Foundry consulted on the small plates for Bar Delux. We tasted a very nice mini-reuben on a pretzel roll and some cheesy arancini. Pictured are baked brie with fruit in crust -- I didn't try this one since I had to rush off to see "Slumdog Millionaire."

4) In case you were wondering, Noah from ManBitesWorld is on day 60 or so of his eating around the world in L.A. marathon and looks to be no worse for the wear. Check out his blog, and don't miss day 57: Hungarian.

hurray for beer centric restaurants! thanks for the update!