Most excellent beer at the Figueroa 7-Eleven 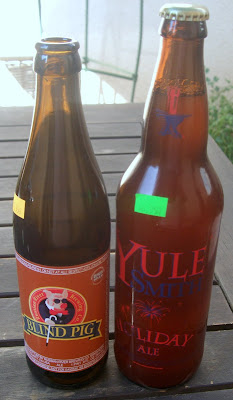 Thank you, manager Charles Chinea, for stocking some of the greatest beer at this unassuming 7-Eleven at Ave. 52 and Figueroa in Highland Park. It's known as the Rock and Roll 7-Eleven since they often play punk rock, cult movie soundtracks or classic rock, although I didn't notice, I was so busy trying to decide what to get. I ended up with an Alesmith Yulesmith Holiday Ale and a bottle of Russian River Brewing Blind Pig IPA. This has instantly become my new favorite beer -- It's bitter, but not overpoweringly so, with a crisp, clean character, so you don't feel like you've just eaten a loaf of bread like with some craft brews. The alcohol content is around 6%, so it won't totally overpower you. And the flavor is just incredibly well-balanced. Here's some more photos of the well-edited selection of Belgian ales, British beers, California craftbrews and much more on the Hair of the Dog blog. Here's another report on the store and the awesome Charles, who wasn't around when I was there, on the Hot Knives guys site.
at 7:03 PM

this place is amazing! i go there to stock up on pliny the elder, my favorite russian river brew. there will never be enough in my fridge. sigh.

let's hope they keep bringing it!

Speaking of great selections, check out this Eastside beer/liquor store,

wow, very surprising. I guess I'll be stopping by this 7-11 for my next beer run.