A taste of downtown history 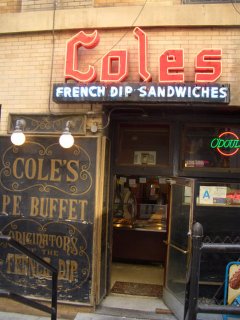 I met up with Franklin Avenue's Mike and Maria and a few other local bloggers at Cole's Saturday to commemorate Franklin Avenue's 100th Rate-a-Restaurant review. I didn't eat, so I'll let Mike handle the reviewing this time. But I had a good Spaten on tap, and I'm glad I finally got a look at Cole's and got updated on some other Downtown news.
-Celia from 5th and Spring and Eric from BlogDowntown filled me in on what's going on with the Cole's building: apparently the building's new owner has applied for several liquor licenses and plans a gourmet market as well, but it's not clear what his plans are for Cole's, the oldest restaurant in L.A. (1908!) So if you haven't been there, try a French dip soon in case they decide to clean it up and hipsterize it. Mike thought Cole's French dips, however, couldn't hold a candle to Philippe's, yet Eric preferred Cole's, so ymmv.
-Fourth St. is the center of much of the new restaurant activity downtown. Celia's b.f. Jim, whom she met through her blog, said he enjoys the Vietnamese spot Blossom at 4th and Winston.
-The tiny Indonesian restaurant Warung sounds interesting, yet the downtown residents agreed they've never seen anyone in there. Eric said Tom Gilmore plans to open a Spanish restaurant on 4th and there was talk of a hot dog stand/art gallery in the works called, I believe, Weenie's.
-As far as watering holes, Celia was pro on wine bar 626 Reserve and the Golden Gopher, but no so much on Bar 107 and the Broadway Bar.

I've enjoyed the dark, other-era atmosphere and deliciously moist french dip sandwiches at Coles. Thanks for the information about the possible, and ominous sounding, developments of this landmark site.

i heard philipes was the place for the french dip in downtown but this looks amazing also. im gonna have to try this