Baroo: Did This "Free-Style Experimental Kitchen" Just Usher in the Latest Hot Neighborhood?


If you are driving east on Santa Monica Blvd. and you overshoot the mini-mall that is home to Baroo, "a free-style experimental kitchen" of Korean-influenced fermented foods, you will probably find parking just a little ways past Wilton Place. You will traverse a short stretch of sidewalk that's home to at least three businesses catering to Oaxacans, a dubious nightspot known as Gold Diggers, the doorway to the Harvey Apartments.

The mini-mall is deserted at night except for the blank white lighted sign in front of Baroo. For some reason I thought I had already read an article deeming Baroo "the most hipster restaurant ever," but maybe I imagined it. It was probably this Eater article instead, What's Up With This Bizarre Fermentation Restaurant in a Hollywood Strip Mall?

Inside the small cafe is a communal table, shelves stocked with fermenting potions in various stages and a counter piled high with notable cookbooks, a nod to tradition and technique also seen at places like St. Martha.

If Sqirl is too bougie now, but you like the vibe and want even more fermented veggies in your grain and egg bowl, then this could be your spot. I confess, I have not yet eaten a full meal there, but I couldn't resist posting some early impressions from a small gathering I attended. 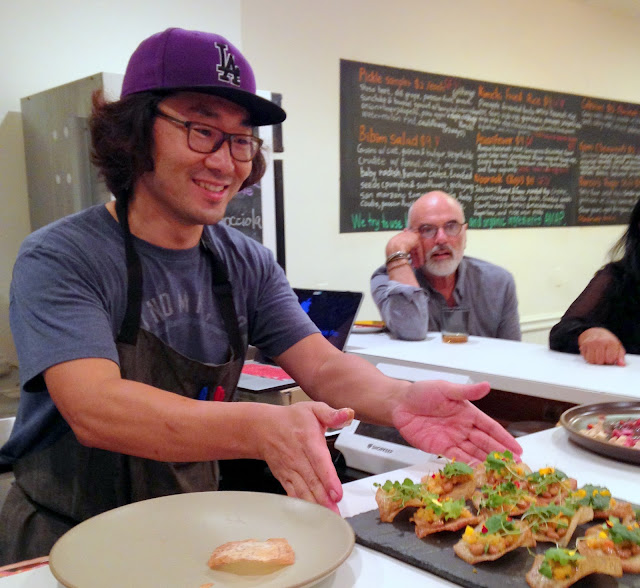 I'm not even sure if the pork belly tacos we tasted are on the menu, but they certainly should be, since they were Hoisin-intensive, fatty in the best way, mildly spicy flavor bombs. Natto wraps, on the other hand, are not the strongest fermented soybean product I've ever tasted but are still most likely a taste that appeals to a select few.

On the blackboard menu, only an oxtail pasta dish has meat in it - most of the bowls are composed of a number of unusual-sounding ingredients (roasted Koji ink cream, Jobs tears) and grains, possibly with an egg on top. Several Kombuchas are brewing on the shelves with innovative flavors like Rose and Elderflower, along with a slew of pickles that can be ordered in a $2 tasting plate.

Open just three weeks, Baroo is headed by chef Kwang Uh, who worked at New York's Picholine and Daniel and staged at Noma, then opened this simple yet innovative restaurant with his friend Matthew Kim. I'll certainly be back soon to what those Jobs Tears are all about.

East Hollywood: It's the next frontier. De Sano Pizza knows that already -- and maybe soon, everyone will.

Baroo, at 5706 Santa Monica Blvd, is open for lunch and dinner every day except Sunday.
at 9:31 AM