Idle Hour Rolls Out a Barrel of L.A. History in North Hollywood

There aren't many better restaurant backstories in L.A. right now than last week's opening of the Idle Hour on Vineland Ave. with a bar, restaurant and spacious back patio. Built in 1941 and made to look like a trio of giant barrels, the Idle Hour functioned as a bar in L.A.'s unique programmatic architecture tradition for years until it was converted to La Cana flamenco dance spot, with tacky aluminum awnings obscuring the barrels for many years. In 1984, La Cana closed, with owner Doris Fernandez retreating to live in the top of the barrel for the next 25 years or so, Spanish Kitchen style, while just a few blocks away NoHo restaurants and theaters were starting to flourish. She died in 2010, and preservationist and Los Angeles magazine editor Chris Nichols was able to help secure historic monument status for the dilapidated building. When it came up for auction, he recruited the Bigfoot Lodge owners Bobby Green's 1933 Group to restore and re-open the historic spot. 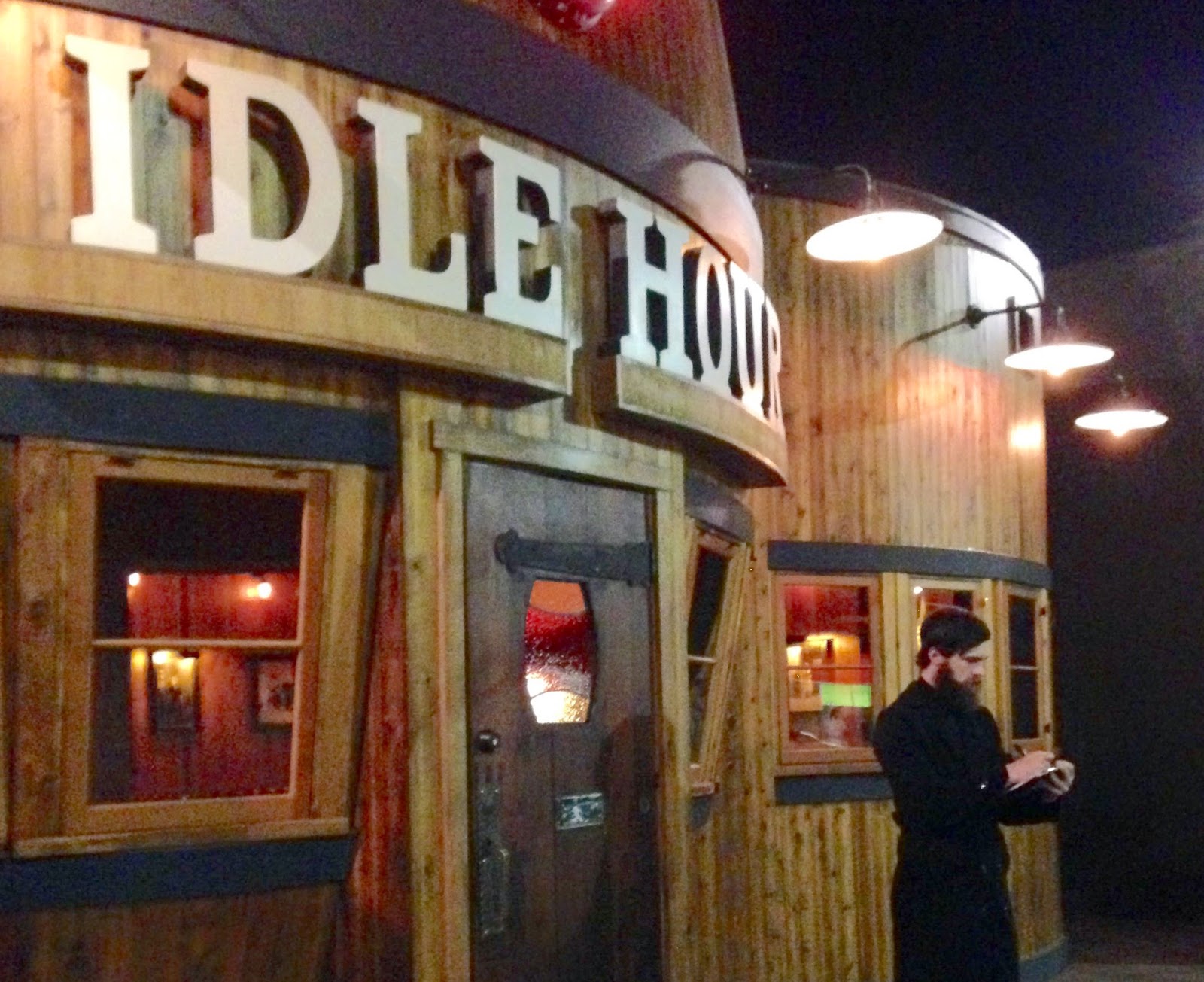 It's taken three years for a top-to-bottom restoration -- it basically had to be completely taken apart and rebuilt -- but last week I checked out the woodsy new bar, which is sure to be quickly packed with Valley dwellers who have only recently been getting some decent drinking spots.
The look: The interior is just like being inside a barrel, with curved wood-covered walls and a tall round roof. Outdoors is another surprise: the Bulldog Cafe from the Petersen Auto Museum, a smaller replica of the one that once stood on West Washington Blvd., has been relocated and can be rented out for parties. The rest of the patio is comfy with a firepit and picnic tables, and dogs will be allowed. 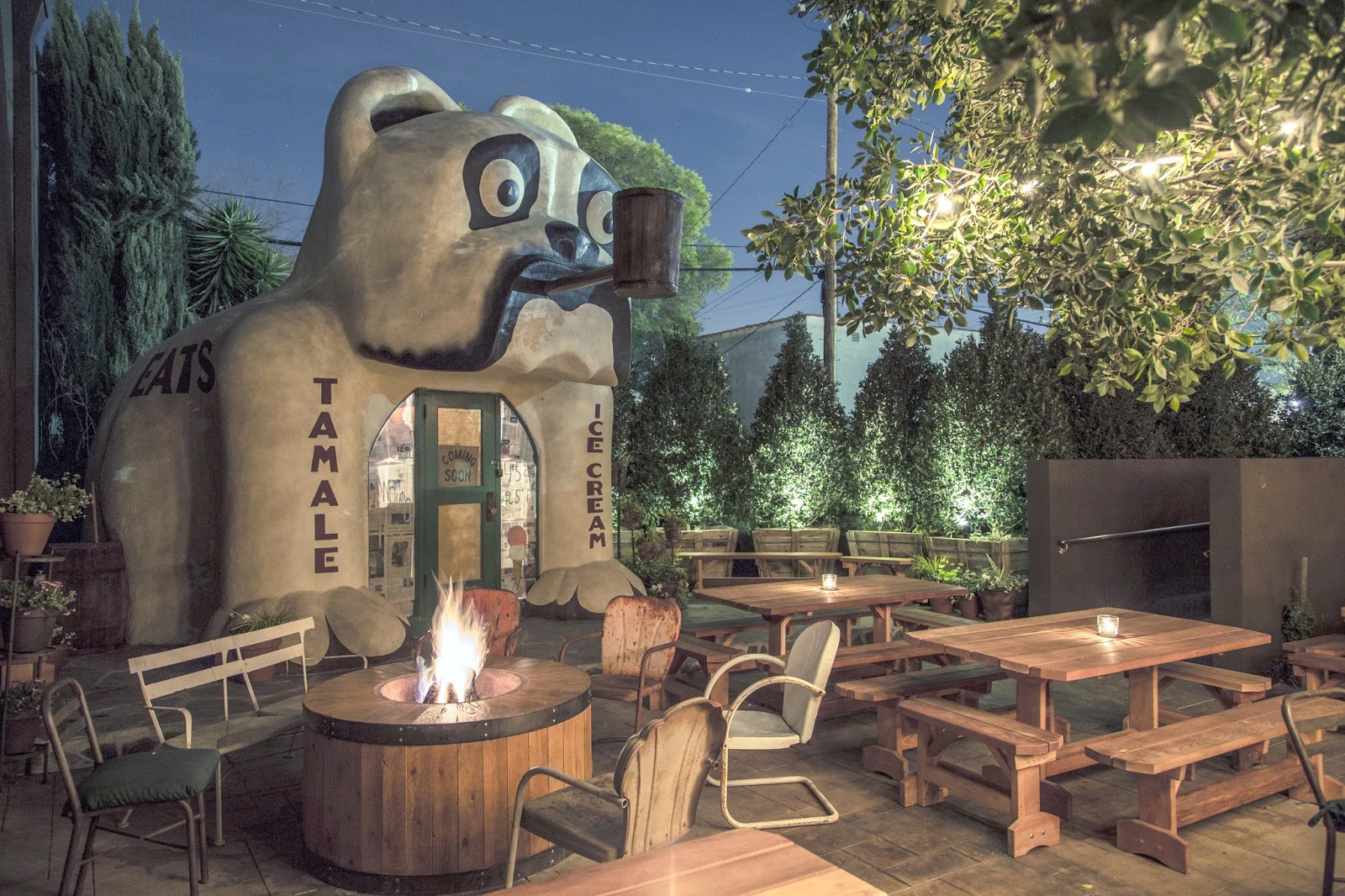 The drinks: There's a selection of draft cocktails (I liked the Maid with tequila, aloe liqueur, mint and lime), a few updated but fairly simple house cocktails and two bottled and carbonated choices, all $12. About 20 taps of California-focused beer include rotating choices like an autumnal Sonoma Bourbon Cider, Ladyface Red Rye and Smog City Porter. 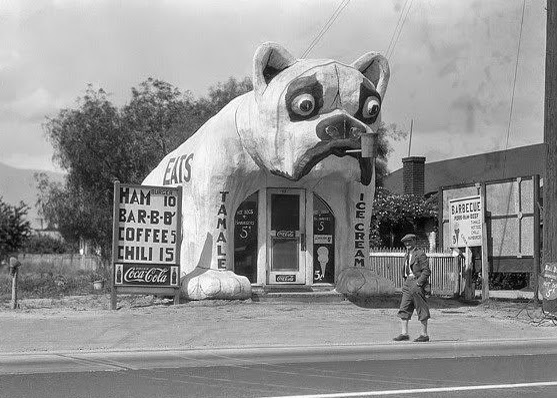 The food: The casual menu is made to go with hoppy beers and stiff cocktails, and the pulled pork sliders, brussels sprouts with bacon, bbq chicken wings all hit the spot. Or try a pretzel with chipotle chocolate sauce.

Warm greetings from a very cold weathered Montreal, Canada. You have a fascinating blog, I really enjoyed my visit here.

I haven't heard of this! Looks really interesting!