Here's a quick first look at a new neighborhood spot, Haché Burger, in the former Tarascos location on Sunset Blvd. It sounds French but the fries, at least, lean Dutch at this very casual spot which for now serves burgers, fries, beer and that's about it. But the prices are reasonable for the area and it's a solid burger that with very small tweaks could be a great one.
The food: Four burgers are on the menu all around $6. They're crafted from Angus sirloin that's always ground within the past four hours. The Karma has American cheese and Karma sauce; the Habanero has chiles and queso fresco; Swiss Onion and the Roaring Forties with mushrooms, horseradish and blue cheese. It's a loosely-formed patty that the owner (who also has Mick's Karma Bar in Irvine) calls ground steak instead of hamburger (haché means ground in French). Triple-fried French fries come with a variety of sauces including satay and garlic.
The drinks: Draft craft beers are just $5; there's also two wines, soft drinks, strawberry basil lemonade. 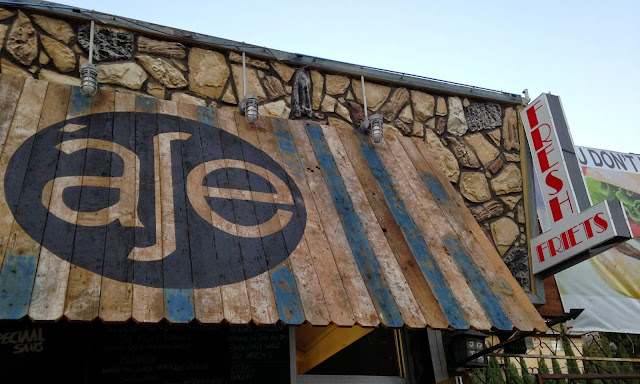 The space: A large outdoor patio is surrounded by plants to soften the Sunset streetscape. It's great for kids, as long as they like burgers.The soundtrack, unfortunately, is made up of loud generic oldies that fight the neighborhood's indie style.
The verdict: It's a juicy, flavorful burger with a good-quality brioche bun and the right amount of toppings. If Haché seasoned the patty with salt and pepper before cooking, it might be even better. Fries were solid but a coleslaw or pickles option would be nice too. We'll definitely return -- after all, we need to find out the difference between Karma sauce and Monkey sauce -- but we'll ask for our burgers to be seasoned first. This area could always use well-priced options since many of the other new places aren't very affordable for the young Sunset Junction crowd.
Haché LA
3319 W. Sunset Blvd., Silver Lake
323.928.2963 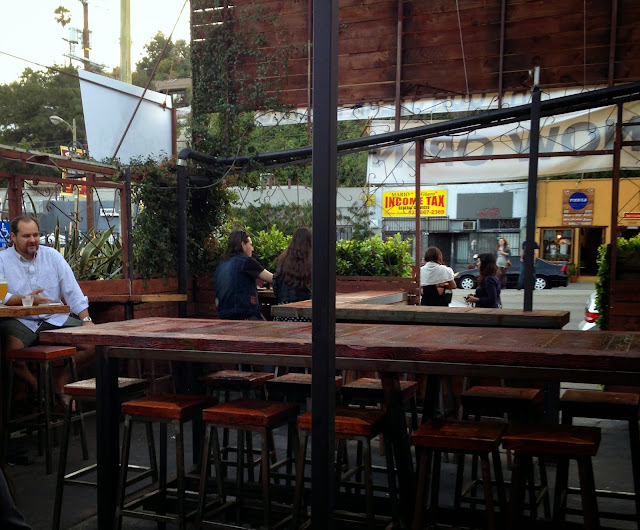 I'm going to have to try it out! Thanks!