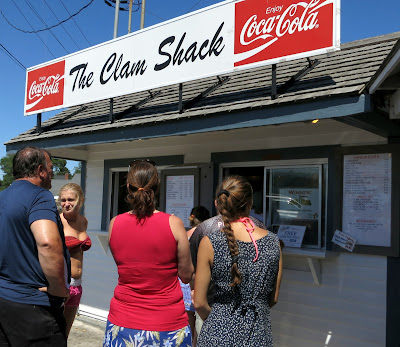 Like other food-obsessed Americans, I spent the years before the Internet poring over Jane and Michael Stern's guidebooks Roadfood and Goodfood. I dog-eared, highlighted and nearly memorized them as we drove from L.A. to New Orleans to Memphis, through Nebraska and Iowa and back. We hit many of the temples to regional American cooking, from Lasyone's Meat Pies in Natchitoches, Louisiana, to Ronneburg restaurant in the Amana colonies of Iowa.
But these days, it's getting much harder to enjoy a food road trip. Why? I ascribe it mostly to Guy Fieri and his Food Network show Diners, Drive-ins and Dives. As soon as he hits a place, the restaurant gets understandably excited about the possible boost to business from national TV, and starts hanging pictures of Guy all over the place and otherwise proceeding to ruin what gave it character in the first place.
Of course, all of us food bloggers also have to take some blame, and Jane and Michael with their Roadfood.com and Roadfood Eating Tours, as well as Andrew Zimmern, Anthony Bourdain et al are contributing to the problem. I actually don't dislike Guy Fieri as much as many people do. Sure, his dated spiked 'do and faux-bonhomie are a little grating, but there are worse things at the end of a long day than watching him chat up small town frycooks.
It's what he has done to these places that grates on me. Walk into someplace like the Maine Diner in Wells, Maine, looking forward to the lobster pie, and you're faced with posters everywhere, touting "best diner in Maine, according to Maine Monthly" and "As seen on Diners, Drive-Ins and Dives."
Then, there's the nearly inevitable "Cash only" sign. Somehow I don't mind that in a grungy Thai spot, but in a place where the lobster pie runs $18 a plate and George Bush lives right down the street, it wouldn't kill them to take credit cards. So, yeah, we ended up fleeing the Maine Diner (a crying baby and mounting headache didn't help.) The next place we found, The Clam Shack, also featured an $18 lobster roll and plenty of signs (Lobster roll winner on Food Wars!), but it was an epic sandwich, and at least the waterside shack had plenty of outdoor seating.
Food and travel TV shows have nearly ruined the pleasures of driving around looking for classic spots, so my new rule is: No "best of" signs! And I haven't abandoned my quest for great road food, but I'll take it with a lower-case R, in places like Trudel's Auctions in Bellingham, Mass., where a woman serves up homemade chicken parm and ham dinners at a cafeteria table in back of an auction hall.
at 11:28 AM

Good commentary. I wonder at what point all the praise becomes a problem. In general, people like the Sterns have done a great job of spotlighting regional places that people might not have found otherwise, beating back the homogenization of our restaurants. However, their mission started in a different era, before blanket coverage on the internet, Food Network and Travel Channel rendered "undiscovered gems" all but obsolete, other than your auction hall, of course.

Personality aside, folks like Guy Fieri and the Sterns are a boon for road food, not the other way around. I live for road trips and knowing about undiscovered gems adds character and flavor to my itinerary, as well as supporting the small, independent shacks, stands and dives that rely on business to survive in this economy. If the lines are longer, so be it. The wait at Cooper's in Llano, Texas can be as long as two hours on some days, but in the end it is worth it; no one in Los Angeles complained about having to stand in line for Kogi as long, or the fact that of our venerated food trucks are cash only on a regular basis. I applaud Mr. Fieri for shining light on these treasures; it seems like the "problem" you are describing is that popularizing these establishments makes it more difficult for us foodie journalists to get in and out. I can't really see how hanging a Guy Fieri picture is more damaging to a food establishment's appeal than an Aztec calendar, velvet Elvis or huge Coca-Cola sign...

I'm with you. I've now found that most "best of" type places, especially those dubbed by Guy Fieri and the like, generally are not.

They might be pretty good, maybe even at the tops before being discovered. But I'm always suspicious of declining quality once the spotlight really hits.

In my mind, they'll get enough business out of it, might as well find the true hidden gem.

I'm from Kennebunkport and now live in LA. You should go to the Fisherman's Catch in Wells, Maine. It's a little further down Route 1 than The Maine Diner but it's so much better! Hope you loved Maine as much as I do :)