Portland, Maine: Bagels, beer and Bigfoot make it just as groovy as its West Coast cousin

Still a California girl, I had never been north of New Hampshire before, so a recent week in Rhode Island seemed like a good excuse to drive up to Maine. Lured by lobster and having heard that Portland is a great beer town, I was eager to see what else Maine had to offer.
In L.A., we could have barely made it to San Diego in the time it took to traverse Massachusetts, New Hampshire and the Southern Maine coast. 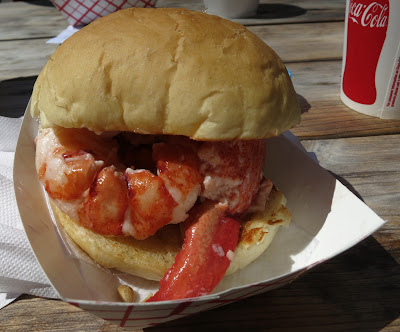 Our first stop was The Clam Shack in ever-so-picturesque Kennebunkport, home of lots of wealthy folks like the Bushes. If you read my rant against the ruination of road food, you know that I'm wary of places that are now on all the shows and in all the guidebooks. And an $18 lobster roll seems kind of high in a place where fishermen are apparently getting all-time low prices for their lobsters. But the Clam Shack's sandwich, served on a round bun instead of the traditional hot-dog shaped bun, was the real deal. I've never tasted such fat, fresh lobster, with a light mayo dressing that didn't hide the mild flavor. It was worth it, though if I lived in Kennebunkport I'd probably have to get used to the cheaper clamcakes.

After a shower and disco nap at our Portland motel, it was time to explore the waterfront. We wandered around actual lobster boat docks and warehouses and checked out lots of seafood restaurants, asking around for directions to Novare Res Bier Cafe, which is on a slightly hard-to-find square just a few blocks behind the waterfront. Novare Res has all the makings of a great beer bar: a couple of dozen taps of unusual brews rarely seen in California, some on cask; a hundred or so other bottled varieties including rare aged beers; a huge outdoor patio bedecked with dogs and happy post-work drinkers, and a full menu of beer-friendly food. I had an Allagash Prince Tuesday collaboration with the Maine Beer Co., bursting with rye flavors, while Matt had a Dogfish Head Black and Blue with blueberries and blackberries.Oh yeah, and most beers were $6, so take that, Northeast L.A.

I checked out a few Portland food blogs before we left, including the strange and ambitious Portland Food Map which categorizes and ranks every bar, restaurant, bakery, etc. in town. It seemed Eventide Oyster Co., though it has only been open a month, was clearly the place to try.
The hip oyster bar a few blocks from Novare Res wasn't just about the bivalves -- uber-tender squid salad and expertly-fried battered hake were as good as the raw stuff. Local oysters from nearby Wiley Point and Pemaquid Point were briney and refreshing, served with kimchi ice and Tabasco ice as well as mignonette.
The next day, I found that there were not one but two renowned bagel bakers in South Portland, while the downtown area had the equally-loved Holy Donut. Which round breakfast item to choose? Our hotel was in South Portland, so we drove out to 158 Pickett St. Cafe, which had been featured in the New York Times.

It was kind of hard to believe that this far-flung, funky bakery-in-an-old-house was supposed to be the place for superlative bagels, but it was certainly charming with a pot-bellied stove in the main room, a large backyard with picnic tables and the most awesome tiki-themed restroom ever. The bagels had a remarkable chew and homey sourdough flavor, though it maybe just a little too much chew as we feared a bit for our dental work.Then it was culture time: an excellent exhibit of impressionist paintings of Normandy at the Portland Art Museum for me; a well-stocked comic book shop and the International Cryptozoology Museum for Matt and his Bigfoot fantasies.
After a walk around Portland lighthouse park and a lunch of clamcakes on the road, it was back to Rhode Island for still more eating adventures.
at 6:30 PM

Enjoyed a lobster roll in Maine as well this season and it cost $14. Your sammie had large hunks of claw meat, which makes it totally worth $4 more :)

The oyster bar and bier cafe look like great spots, and $18 is still less than most lobster rolls in L.A., and you got it at the source. Of course, they don't have to ship cross-country, so maybe $18 is a bit much, but as you said, The Clam Shack is probably the best known spot in the area. That comes with a premium.

That shrimp sandwich is HUGE and makes me drool:-) Thanks for sharing all these!