Griffins of Kinsale: A wee trip to Ireland via South Pasadena

EatingLA recently reviewed South Pasadena's new pub Griffins of Kinsale for the South Pasadena Patch. Though locals are divided over whether Griffins is really an "authentic" Irish pub and whether it should have printed menus, a formal sign and other niceties, Griffins is a very welcome addition to South Pasadena which is sorely deficient in casual places to grab a beer. We thought the food was quite solid, though a few more taps of beer would also be nice (and maybe some happy hour pricing). They do allow munchkins, so go later in the evening if drinking with tots is not your cup of tea. Here's an excerpt from the review. 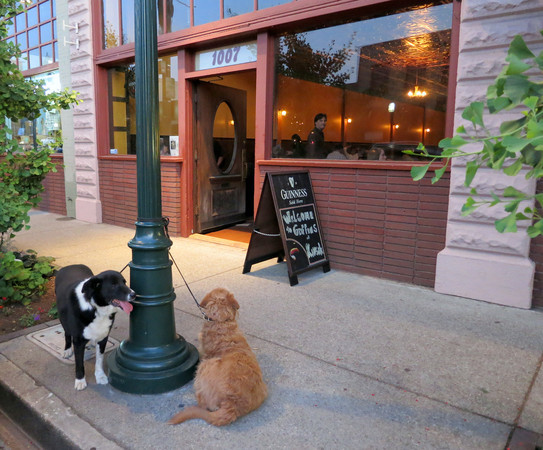 The food: Griffins’ chef Andreas Moyer learned his Irish specialties from a little old Irish lady at a previous job, and he seems to have really gotten the hang of the Enchanted Isle. Corn beef and cabbage is tender and clean-flavored, served in a generous portion for $14. Shepherd’s pie, salmon, lamb stew and bratwurst cooked in Guinness make up the rest of the brief but authentic menu – these dishes seem made to go with a pint of ale.  Ask for malt vinegar to give the potato wedges the true pub taste.
The drinks: Irish beer, of course, is the main attraction. Though Griffin has more beer lines in case he wants to expand, for the moment there’s six taps. Guinness is, well, Guinness, while Harp is the familiar Irish lager for lighter tastes. Smithwick’s is a crisp reddish amber ale with a pleasantly bitter finish, while Kilkenny cream ale has a mild taste with caramel notes. Lagunitas IPA will please those who don’t find Irish beers hoppy enough, and draft cider is especially good on a hot day. Also available: a brief wine list, mixed drinks and Irish whiskeys including several Jameson choices.