Except for an awkward blind date with a guy named Michael Bolton (don't ask), most of my visits to Tom Bergin's have involved standing up in a packed the bar area, saying goodbye to somebody leaving Variety. Tom Bergin's Fairfax location makes it a perfect journalist watering hole for pubs like Variety, Los Angeles magazine, the Hollywood Reporter, Angeleno or the Condie Nasties.
Alas, most of us don't nip out for a few scotches on our lunch hour anymore, so we saved up for farewell parties at Bergin's, where the middling food took a backseat to farewell toasts.
After closing for several months for scrubbing and polishing, the 75-year old Tom Bergin's is now re-opened, with an all-new menu that's light on potato skins and other staples of bar food, instead concentrating on gastropubby fried chicken skin, free range burgers, Irish stew and cottage pie.
The new owners, who also run Little Dom's and Dominick's, wisely elected to leave the interior almost just the same. I hadn't realized what a lovely patina of age the place has until Los Angeles magazine's Elina Shatkin and I checked it out for lunch a few days after it re-opened. The number of historic restaurants around L.A. diminishes each year, and we should treasure each one, preferably while consuming several pints and Irish coffees.

The beer list has also been buffed up, with pints at a reasonable $6 that include the expected Guinness and Harp as well as O'Hara's Irish Red, Firestone Double Barrel Ale, Duvel and Stone IPA. Bottles and cans include some fairly exotic choices -- Pedigree Ale, Wexford Irish Cream Ale -- including Belgian DeuS on the reserve list at a jaw-dropping $69.

My seared cod sandwich with malt vinegar mayo was much better than anything I'd had at the old Bergin's, though $13 for a sandwich at lunch with another $3 for fries or salad means I won't be indulging too often at lunchtime. 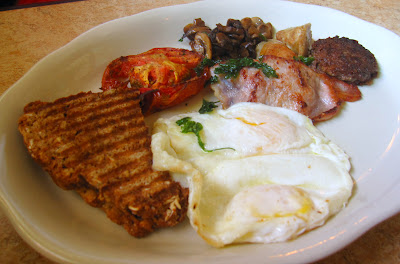 Elina's traditional Irish breakfast (served all day!) substituted chicken sausage for the traditional pork, but supplied the requisite blood pudding along with fried eggs, mushrooms, tomatoes and grilled soda bread -- a hearty breakfast, but not a cheap one at $16.
Tom, we're very glad you're back -- you never know when another reporter might move on to a new job. But I hope the regulars are ready to substitute trendier chicken skin for old-school potato skins.
Tom Bergin's Tavern
840 S. Fairfax
323-936-7151

Don't know if this is helpful but there's some awesome cooking lessons on Skilloop.com if you wanted to enhance this awesome blog!

i'm not really a coffee or pub person myself. but you got some nice posts ! ummmm, can you post some comments in my blog too ? this is the link for it ! http://thegreatestthingsonmylife.blogspot.com/