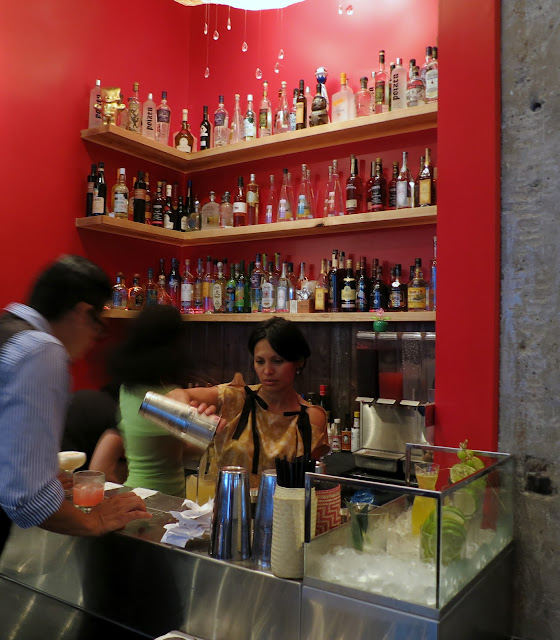 Peruvian chef Ricardo Zarate's Mo-chica seemed like a wonderful  find when it opened in Mercado la Paloma south of Downtown three years ago. Zarate was quickly hailed as a talent to watch, and for a while Mo-Chica remained, if not a foodie secret, at least somewhat under-the-radar with its early closing and no-alcohol policies. Then Zarate quickly shot to the top of L.A.'s food scene when he opened the ambitious Picca in Beverly Hills. Now Mo-chica too has grown up, moving from the folksy Mercado to an industrial chic space with a full-bar across from Mas Malo on Seventh St. It's bittersweet in a way, since the sense of a find and maybe a deal too has been lost, but longer hours and a more central location certainly allows many more people to experience Zarate's always on-point cooking, now with delicious cocktails from Brian Summers and Deysi Alvarez. We were invited to sample quite a few dishes from the new menu, which is a bit more compact and casual than Picca's, but with still with plenty of creative Peruvian flavors. Here's a few highlights:

What does alpaca taste like, you ask? Not as funky as most goat, closer to an earthy beef than to meats in the lamb/goat family. The piquant sauce cuts the earthiness and the fried egg.
An odd combo of incredients, and the pea leaves (?) were hard to eat. But the olives, feta, potatoes, corn and peas all played very nicely together.
Not my favorite of the dishes: I've got nothing against blood sausage, but it wasn't a crostini you could pick up like an appetizer, but rather resting on soft bread with a lot of sauce. Just didn't work as a knife and fork dish. (Also, Peruvians really like huevos, but be careful or you could end up with a lot of fried eggs.)
Paiche is an Amazon river fish with a meaty texture and mild swordfish-like flavor. Paired with a deeply flavored saucy rice and vibrant cherry tomatoes, it's filling enough to be a main course and very satisfying.
Our dessert was the fruitiest creme brulee ever, which was a good thing. Though I love a solid dish of cream -- who wouldn't -- this was lightened up with purple corn, pineapple, apples, apricots and raisins. Served in an adorable enamel mini-bathtub, I could have eaten one the size of a baby's bathtub.
Mo-chica
514 W. 7th Street (@ Grand)
Los Angeles
213-622-3744