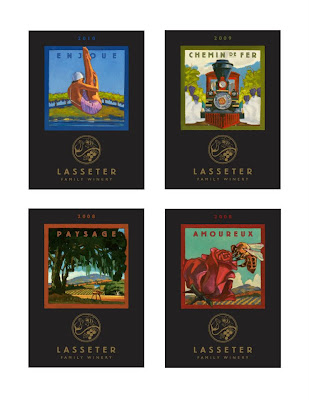 Pixar founder John Lasseter and his wife Nancy have been wine lovers almost as long as they've been animation buffs. They started making wine after moving to Sonoma County in 1993 -- just before "Toy Story" catapulted Pixar into the animation big leagues. Nancy is the force behind Lasseter Family Winery, the Glen Ellen winery that makes wines influenced by their love of the French countryside: Enjoue, a Syrah, Grenache and Mourvèdre rosé and three red blends called Paysage, Amoreux and Chemin de Fer. We tried all four at a Lasseter dinner at Patina the Friday before the Oscars. 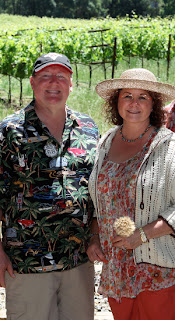 Did you know that some people are such ardent Disney/Pixar fans that they'll drive from Orange County for a $130 dinner at Patina just to dine in the presence of Lasseter? Nope, neither did I, yet it does seem like a much better deal than, say, eating at Disney's Club 33. Plus, John and Nancy are extremely gracious hosts, circulating around the tables and freely sharing stories of their Sonoma county honeymoon and trip to France's Bandol region after the Cannes premiere of "Up."
Drinking the rosé with Patina chef Tony Esnault's marinated kampachi with tangy green apple mustard took me straight back to Cannes, too. All three reds are very drinkable, not terribly complex but easy to pair with lots of dishes. Paysage, a Merlot-predominant blend with cabernet, malbec and cabernet franc, was my favorite, a fine pairing with Esnault's deeply beef-flavored sous-vide shortribs.
Lasseter Family Winery is now open by appointment for tastings in Glen Ellen, near the town of Sonoma, and the wines are available at most Patina restaurants and at Flask Fine Wines in Studio City.
at 1:12 PM