Golden Road Brewing: Yes, we can!


Golden Road Brewing has come together in an amazingly short time compared to most things in L.A., and Sunday was both the grand opening of the pub eating area and the beer's availability in cans. Just seven months after the brewery was first announced, the owners of Tony's Darts Away and Mohawk Bend are brewing around a dozen beers, offering growlers to take home, cooking up a full menu of vegan and omnivore dishes and canning two varieties of beer which will soon be available at Whole Foods around L.A. 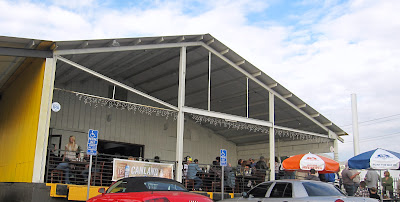 The first two canned brews (in generous pint cans) are Golden Road Hefeweizen and Point the Way IPA, both versatile beers that are solid representations of their styles. The cans sell for about $3.29 each or around $11.99 a six pack, and the Hefeweizen has a screen print of Los Feliz's Shakespeare Bridge for true local flavor. The Hefeweizen was a little light for my taste despite subtle notes of lemon and orange, but perfect for most Hefe lovers. However, we also tried the El Hefe Anejo on tap at the brewery, a Hefeweizen style brewed in tequila barrels, that was one of most flavorful of the type I've tried. The Point the Way is a nicely-balanced IPA with a moderate 5.2% alcohol that won't clobber you over the head with bitterness. 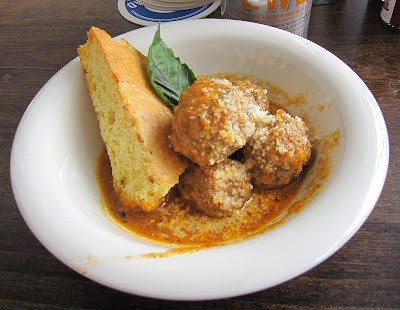 Several other Golden Road beers are available on tap, including Rye on the Palate, Get Up Offa That Brown and Lost Its Way IPA. Like their sister establishment Mohawk Bend, the menu offers plenty of vegan dishes alongside meatier choices, like the beef and pancetta meatballs with cornbread, above. A coconut noodle-cabbage salad has roughage for days, and sides like bean salad or miso crabby salad offer a nice fresh counterpart to heartier fare like burgers, a pulled pork sandwich braised in Hefe or a Sloppy Joseph sandwich with stout-braised short ribs. Vegetarian dishes include vegan meatballs, vegan banh mi, a chickpea sandwich or portabello mushroom Philly sandwich. Because the fryers are kept for vegan items, there's no fish 'n chips at the moment.
With plenty of room on the spacious covered patio or inside the cavernous warehouse of a pub, Golden Road is sure to be a festive gathering place despite its neither Atwater-nor Glendale location (it's across from the Glendale Home Depot, on the other side of the railroad tracks.) Each time a train goes by, everyone raises a glass, welcoming the passengers bound for Santa Barbara and beyond.
Golden Road is open every day from 11 am to 11 pm.
5430 San Fernando Rd.
(213) 542-6039

I didn't love beer until it was paired with the perfect food. But I'm in love with Golden Road. Check out the peppered steak with mashed potatoes. And the twice baked potato with some coconut noodle salad is amazing.