Highland Park residents were long overdue for an alternative to Good Girl Dinette, the York and the old-school Mexican choices, and with the arrival of Andre Guerrero's casual, lively Maxmiliano, the restaurant scene has taken a huge step forward. It can be hard to find an Italian restaurant that doesn't have the same menu as every other one, but Guerrero is keeping things interesting with a large selection of appetizers and salads, several creative pizzas, a clutch of excellent homemade pastas and a handful of carefully-wrought mains. The Oinkster and former Max owner treated us to a tasting of all these dishes but we would have been happy to pay, since everything far exceeded expectations. 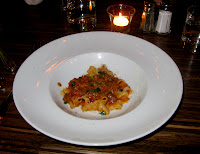 Among the pastas we tasted were cavatelli in a creamy mushroom sauce; tagliatelle in a meaty bolognese; and chicken ravioli with mushrooms. My favorite was angel hair pasta, with a porky, spicy amatriciana sauce packed with pancetta and jalapenos. Roasted beets were simple and satisfying with crumbled ricotta, and the market salad was elevated with several varieties of peeled cherry tomatoes. 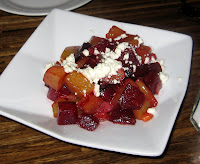 In just two weeks, news of the thick, juicy pork chop has already gotten around, so it sold out early Friday before we could order one.

So instead we tried the chicken entree -- the bird doesn't get much love in restaurants, since people think of it as home cooking, but I would be hard-pressed to create a breast as moist as Maximiliano's, with olive oil-slicked spinach and a savory jus and crispy skin. Guerrero thinks restaurants, especially those with wood-fired ovens, tend to overcook their pizza so Maximiliano's pizza is more supple than crispy, with browned slices of garlic and potato on one memorable version. 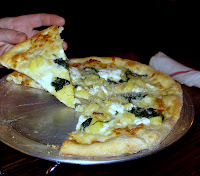 Matt proclaimed the cannoli ideal; I'm just not enough of an East Coaster to judge. What I did like: the affordable wines available in quartinos as well as glasses and bottles, the selection of local Craftsman beers, and the fact that all dishes are under $18. In a few more weeks, Guerrero plans to put tables and more edible plantings on the large rear patio and open for brunch. I'll certainly be back to try the coconut-lavender ice cream grown from the patio box's lavender, the cavatelli with pancetta and squid, and of course the pork chop.
Maximiliano
5930 York Blvd.
Highland Park
323-739-6125
at 8:09 PM

The pork chop is truly wonderful, even tho I was not able to have one last night. The Cavatelli was very good while the risottos are excellent and worthy of trying next time.
Not in love with the olive oil ice cream nor the chicken ravioli, as both seemed a bit more bland than they should be.
The chicken entree was very good, again!
I hear the salmon entree is also very good.
ps - corkage is $15.

Thanks for sharing this. I finded around your blog and found your blog is superb. There are a lot of info for me to study, thanks for your great share.

Very psyched to try this place! Love the neighborhood and of course The Oinkster. But the kicker for me was the overcooked pizza quote. I could not agree more! Looks legit, sounds correct.

PS -- Just for the record, I too finded your blog is superb. Thanks for your great share, sharing food lady. Lot info me to study. Me so happy. Me want to cry...

Great review! thanks for sharing.

I've been here 3 or 4 times now (i live around the corner) and the only thing i wasn't excited about after tasting was the Eggplant pizza. Everything else is delicious- love their cannolis, their arugula/lemon pizza, potato pizza, various apps. and their wine. If you want to go on Fri-Sun i advise making a reservation.