The first L.A. Craft Beer Crawl started out on the toasty side -- it was at least 100 degrees as I boarded the Gold Line in South Pasadena to start the Saturday afternoon crawl. By the time I got to Casey's and Seven Grand, I really needed a beer. Starting out at Seven Grand with Craftsman's Fireworks Saison, I moved on to Las Perlas and tried Uncommon Brewers' Bacon Brown, which had only the faintest hint of bacon.
More to my taste was Eagle Rock Brewery's Populist IPA, and Belgian-style Blond from Brouwerij West, a new Palos Verdes Belgian-style brewery. Las Perlas was also serving smoky chicken mole tamales from Guelaguetza, the perfect pairing for the bacon beer. Hanging out at Las Perlas were Verdugo Bar and Surly Goat owner Ryan Sweeney and Craftsman Brewing's Mark Jilg. Everyone I spoke with was floored by the turnout -- more than 1,000 people roaming the steamy streets of downtown tasting dozens of great, mostly local beers. 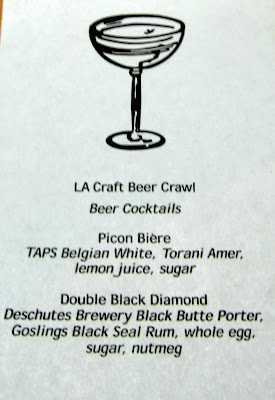 Doing the entire crawl down to Cana and Golden Gopher might have been a bit much in that heat, so when I got to Cole's I basically holed up here it was dark and cool -- at the Varnish, where they were concocting refreshing and different beer cocktails. But first, I enjoyed both Taps Cali Gold XPA and Schwarzbier, which I hadn't tasted before. Also holing up at the Varnish were Jonathan Gold, Evan Kleiman, Ladyface Alehouse proprietors David and Cyrena, and expert booze bloggers including FoodGPS and SavoryHunter.
We also sampled Hot Knivez contraband Tonka Bean Porter, Tonka Beans are banned by the FDA because they contain possibly dangerous coumarin, and since I'm not going to be eating any fugu anytime soon, that's about as close as I'm going to have to get to living on the edge.
On the way home I stopped by the Pershing Square Autumn Lights exhibit which was pretty cool, freaky and uncrowded, and a lot easier to get to than the Glow festival. I know -- there was also lots of great beer I missed from The Bruery, Dogfish Head, Unibroue, Alemsith and much more. The Beer Chicks, who organized the incredibly popular event, plan to do it again next year, so I'll just have to start in the other direction next time.
at 2:25 PM

Ooh I just saw Brouwerij West Blond as Simmzy's yesterday, wasn't familiar with the brewery so I opted for Napa Smith's Pale Ale instead (which was also quite tasty). Will keep an eye out for their beer at local watering holes.

Great to see you at The Varnish. That was quite a finish to a special beer day. Christina, Hallie and 213 deserve a lot of credit for mobilizing so much interest in beer. This bodes well for DTLA.

The Varnish was open? Damn it, i was shoved in at the bar at Cole's. I missed out on some booze!