Surly Goat off to a sudsy start in West Hollywood 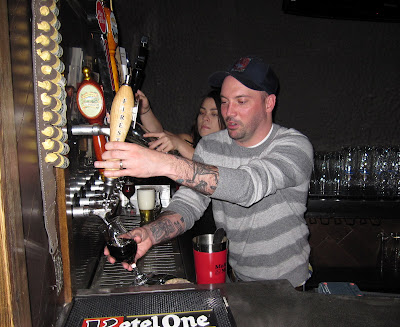 Ryan Sweeney opened the Verdugo two years ago and has branched out to West Hollywood with the Surly Goat.

West Hollywood now has its own high-end beer bar with The Surly Goat, from Ryan Sweeney, Adolfo Suraya, Brandon Bradford and Alen Aivazian. The Goat has been quietly open for about three weeks, and Sunday night the clubby, pubby Santa Monica Blvd. beer bar held a grand opening celebration. There were some intense brews flowing. I tried the complex, high-alcohol Firestone Walker 13 anniversary ale, with hints of fig, bourbon, chocolate and maple syrup; just-right Ballast Point Calico Amber Ale, a medium-bodied, drinkable Sierra Nevada Glissade Golden Bock and an overly light Speakeasy Public Enemy Pils. The spacious pub has a patio, a cozy semi-private room in back, and lots of seating in three other areas. 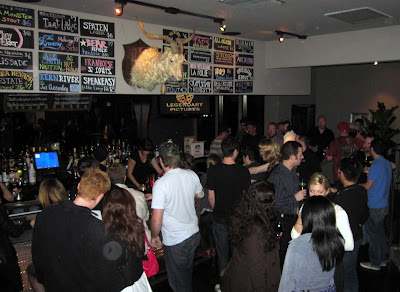 There's no kitchen, so Sweeney plans to let patrons eat sandwiches from Shoop's or barbecue on the patio from Baby Blues next door. With a staff who are all carefully trained in beer styles, 27 craft beers on tap including Eagle Rock brewery beers, cask ales and 100 bottles, many of them rare beers, The Surly Goat is setting the bar high for beer bars and giving the Third Stop some stiff competition.
The Surly Goat
7929 Santa Monica Blvd.
West Hollywood
323-650-GOAT
at 9:51 AM

was in last weekend, but sadly there were playing really bad music, at top volume...

great beer selection, but let's hope they can figure out that the music is just as important as the quality of the beer! it was too loud to talk even, which is a shame..

ill be back for sure for the beer, lets just hope the vibe improves.

What is it that you consider "bad" music? That's pretty important to clarify if you're going to make such a blanket statement about a place.

I guess it depends on what you think bad music is and who was playing it. Sunday night it was Ryan's own playlist, heavy on the 80s punk and new wave, and personally I thought it was awesome. But they probably have different djs on different nights.

Nice story. I definitely have a different point of view than you on beer, however.

As a life-long imbiber, if I'm going to drink a beer, the only thing I want in it is beer.

Of course, many a tines, indeed, I drank a good beer as a chaser. But as far as any "high-end" beer joint, which I'm positive has the kind of better made and tasty beers, people, if you want a boiler maker or something else to drink, don't ruin your beer with some other type of alcoholic beverage in it.

In the immortal words of Jeff Bridges as The Dude, in the movie, The Great Lebowski, I'm the Dudester, eE Duderino, the Dude, et.al.--just don't do it.

Lastly, I don't see the need for a "high end" beer joint. Give me any venue of any quality, and if they have 3-5 high quality draft or beer on the menu, that should be all that's needed, IMO.

Thanks David, but I didn't say the beers contained anything else -- only that it was flavored with hints of bourbon because it is aged in Bourbon barrels. And personally I enjoy having more than five beers to choose from.

good to know! my husband and many of his friends are into the microbrewing scene and will be very interested...

we like the Verdugo's beer selection well enough, but their bartenders are always messing things up, or the music is SO loud that we've stopped going.

Surly Goat is the most exciting new addition to hollywood. I've already been about a dozen times since its open. No bar in that area even remotely matches its beer selection, and comforting vibe..

Have you all not been to Blue Palms? They have 24 rare beers on tap plus a hand pumped cask ale, in addition to dozens of pages of bottled beers.

Ratebeer.com named it the 8th best beer bar in the world for 2010 and it's in our backyard.

They have good food too, and Thursday is $0.25 wing night.


and sorry, i should have clarified my statement about bad music.

i mean songs like groove is in the heart, foreigner, etc... and super loud volume! so loud you could hardly talk.. it felt like a bad wedding dj.... sorry, just honest.


ill be back for beer though, lets just hope that dj doesnt..

You don't "see the need for a 'high end' beer bar" because you're clearly oblivious to the amazing diversity of the current beer scene. It's akin to viewing wine as simply red or white. Do yourself a favor and give Surly Goat a try. Sample an IPA (Kern's Just Outstanding is appropriately named), maybe a wheat beer, and then go out on a limb and try a sour beer or the whiskey barrel aged Sea Monster Stout (just to be clear, it's aged in a used whiskey barrel, no whiskey added). I think you'll be surprised by what you've been missing out on.

because this place has a plethora of beer on tap, is there by chance some sort of "beer sampler" one could choose to order? I think that would be key when you've got loads of brewed deliciousness to pick from.