Saladang Song: What took me so long?

A chicken omelette with soup was different than the usual Thai menu item...

Foodies sometimes seem to sniff at Pasadena's Saladang and Saladang Song -- so even though I've lived nearby for a year and a half, I wasn't rushing to try them. Plus, on nice summer nights, there's usually a large, off-putting crowd out front. But on a rainy Friday, 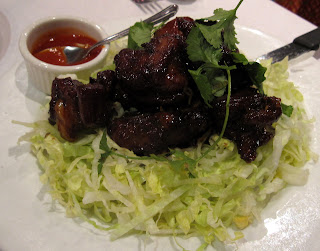 though the restaurant was filled with several large groups of birthday celebrants (be ready for lots of singing and noisemakers), there were still two-tops available.
We definitely shouldn't have waited so long, since the food was a healthy cut above other Thai places in the area (don't even get me started on Patakan!).
I used to date a guy who always ordered the weirdest thing on the menu, whether it sounded good or not. Maybe that's what inspired me to order a Thai chicken omelette which comes with a cup of clear broth. Why? "Because the omelette is very dry," says the server. Not sure if that's a big selling point, but it's not bad, just not too exciting. For some reason I'm craving old-fashioned Polynesian-style spareribs, and Saladang Song's have a satisfyingly tangy sauce, but they're chewier than strictly necessary. 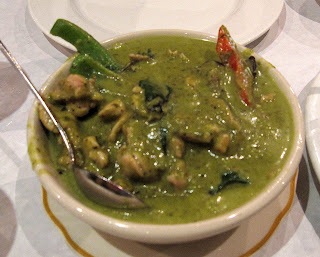 The big winner is a zippy, creamy-sauced green chicken curry, that I'd definitely order again.
Though the service was a bit rushed and the prices higher than Hollywood and Silver Lake spots, that's not enough reason to avoid Saladang for as long as I did. We'll definitely be back to sample more items (corn fritters?), since there were a few things going to other tables that looked intriguing. Any suggestions? Any reason to go to Saladang instead of Saladang Song?

I've always like the ambiance at this place. The service is spotty sometimes but you can't doubt the niceness of the interior or even the feel of the patio on a warm summer night. The food is pretty good too.

The green curry is one of my faves at Saladang Song too, and on fairer days I love dining in the chic courtyard; this past weekend though I went to the original Saladang and indulged in their spicy curry fried rice. Can't wait to eat the leftovers today for lunch!

I'm not sure I've ever found anything appetizing at either Saladang or at Saladang Song.

Saladang Song was one of the first restaurants I wrote about for Food GPS. My most recent visit was a lit of a letdown, but it's still pretty solid. I'm also a fan of their green curry. Next time you go, try the pork skewers and yum eggplant - grilled strips of eggplant with shrimp in lime chile sauce. The original Saladang isn't quite as interesting, but they do have good glutinous dumplings with ground pork and peanuts, and their sizzling beef in peanut sauce is also pretty strong.

Those two are good, but Indra over in Glendale on South Verdugo Road is great. It is the only place that I am aware of that serves traditional seafood curry.

Pretty sure that omelette should've been served with "cha-om" instead of chicken as a main ingredient, and matched to some type of "kaeng" curry/soup. Wonder if Lesley knows about this place, she was just complaining about Pasadena grubbin' last night.

i love the choo chee salmon!

Saladang Song is better, and the courtyard seating on a warm evening is great.

The yellow curry at the original Saladang is our takeout comfort food. It'll cure what ails you. We've had several memorable group meals at Song on the courtyard-- it's a perfect place when you have a group of adventurous eaters that includes vegetarians-- everyone is happy. Yes, service isn't great, but it gets the job done.

Both places have been 'go to' Pasadena Thai places for me for years back to before Song was open when it was still the Kelly Paper building. Have never quite figured out the menu differences (regions?) but like both for different reasons. Nothing earth shattering but steady and reliable.

I like the original Saladang better. Their Sizzling Beef is amazing--beef, cashews, fresh spinach, cucumbers, and a cashew sauce. Yum!

Heavy on the decor/setting, light on the variety/quality of food. For real Thai food in a lesser, yet not bad, setting, Jitlada in Hollywood is truly a world apart, or for that matter, most places in North Hollywood, like Sri Siam, etc.
but if you just want to stay local, well, it will suffice.