Food trucks watch out: 5900 Wilshire to get real restaurants 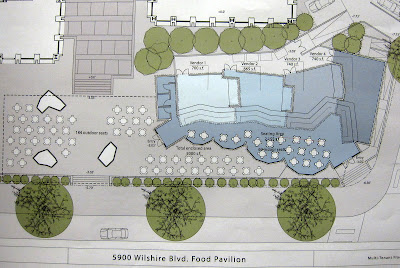 When our office moved to 5900 Wilshire, we had to walk several blocks to get food unless we wanted to eat at the LACMA cafeteria. Then a few months ago, the food trucks arrived, both in front of 5900 and at our old 5700 Wilshire buildings. Yesterday saw the debut of LA Bento serving up tasty, if pre-packaged meals in the lobby, so it keeps improving. Now it looks like developers the Ratkovich Company are ready to sacrifice the mid-century fountains, home to a family of ducks, on the front lawn. The rendering above shows a series of four vendors and a large eating area around the front of the building. I can't wait to see who moves in, or how long it takes to eradicate the fountains. Still no word though on the large pavilion on the left, which was supposed to become an upscale restaurant. 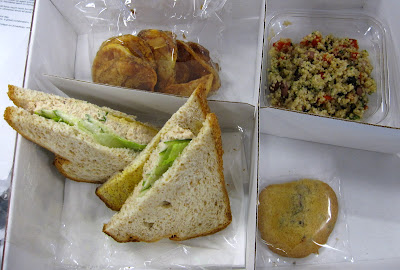 LA Bento: A very nice tuna sandwich, but is the bento box worth $10?

Looks like your lunch hour is in line for an upgrade. An upscale restaurant seems strange for that stretch of Wilshire. The kind of casual options you'd find downtown during the business week would probably work best. What about something like Mendocino Farms?

love the way that bento looks!